After our long hike back to the car from delicate arch we started to notice that Arches National Park is just as incredible at night as it is in the day time.

So we decided to have a little fun with long exposure photos and our flashlights. We headed over to balanced rock which is just off of the main road and set our camera up on a fence post. Then we set the camera for a 30 second exposure, hit the shutter and ran around the bushes to shine our flashlights on the rocks and trees to light them up. (If you look closely you can see that the stars have moved in the sky during the photo, because they are a little smeared) 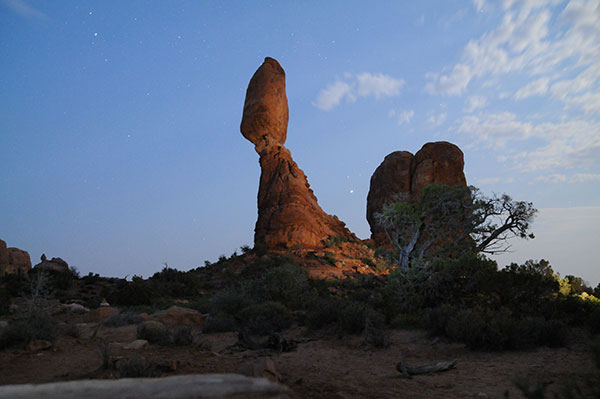 I was using Sandra’s flashlight which is the LED light that makes the tree a little blue compared to the more yellow color coming from the other flashlight. This was fun, we did this over and over until we decided that it was just getting too dark to play anymore.

On our way back to the campground we stopped to take one more long exposure photo of the rock formations in front of sand dune arch. We didn’t want to hike to the arch itself because it was a long way to go in the dark but these rocks were very alien looking anyway. Again we lit the rocks with a flashlight for the long exposure. 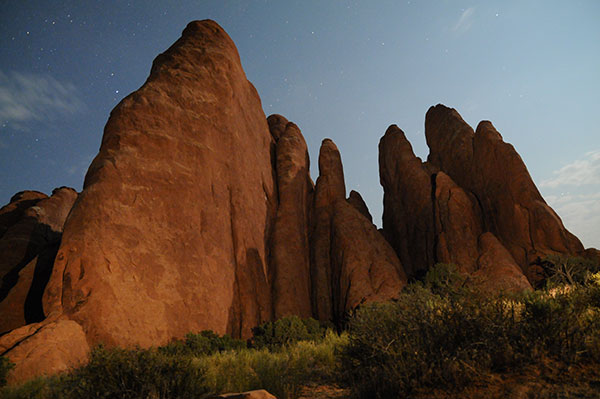 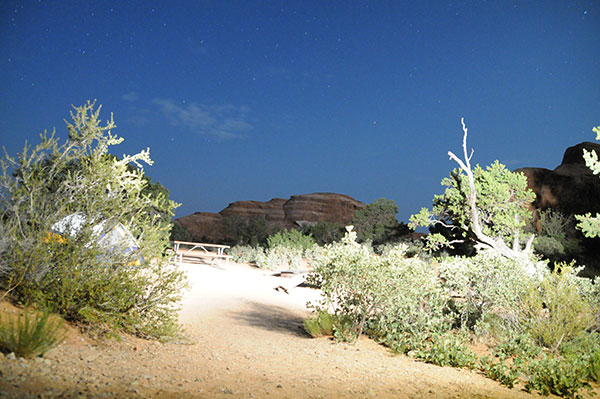 We camped across form the Amphitheater and the bathrooms which was great because we had a long day and we were looking forward to some sleep. After brushing our teeth at the bathrooms we kept hearing a noise in the bushes between us and our campsite. Whatever it was sounded pretty big so we turned on our flashlights and headed over cautiously. (There are mountain lions and bobcats in the park, along with big horn sheep which could hurt you too!) We would have to pass the bushes to get back to our campsite anyway.

As we passed the bushes we didn’t see anything until we were standing in the middle of the road looking back. It was a Mule Deer pulling branches off of the bush and we were standing three feet from it! It didn’t seem scared of us at all until Sandra turned off her flashlight and it jumped as if startled. I don’t think it saw us because of the lights, but when she turned hers off all of a sudden the deer could see a person standing there.

It never ran and just moved to the other side of the bush to continue eating. We headed off to bed wishing we had more time at this park because it is absolutely massive and we were only going to see a fraction of it. But in the morning we were going to try to get the biggest fraction we could get!