Our cruise back in September was our big 5th anniversary celebration – we are usually too busy in December to take time off. So we stayed low key and went to dinner at Chatham’s Place. We both had one of the special salads of the evening – it had arugula, pineapple, tomatoes, hearts of palm, red peppers, tangerines and it was topped with a puff pastry filled with brie and anchovies. This is hands down the BEST salad I’ve ever had! I want to go back again and again just for the salad! 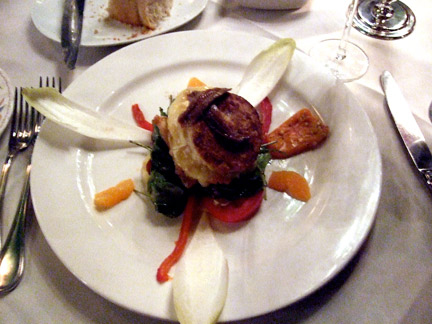 Then for my main course I had the duck with blueberry sauce and it was wonderful. Here it is: 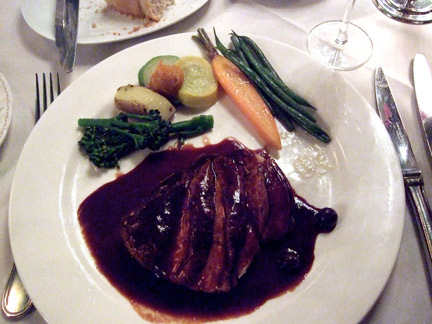 And Chris had the filet with a jumbo shrimp. He let me eat the shrimp – yum! Here it is: 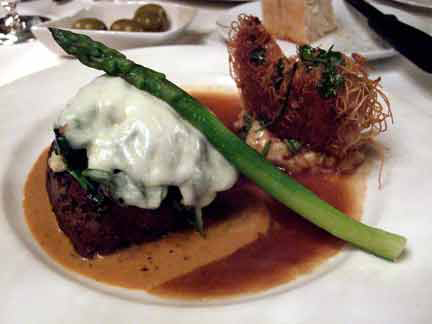 And mission impossible seems to be getting a good photo taken. We tend to have all photos that are “self-portraits” but when you hand the camera to a stranger, you never know what you are going to get. On our Alaska trip, we handed the camera to a stranger, the took the photo and handed the camera back and we said thanks and walked off. I looked at the back of the camera – there was no photo! People just push down the auto focus and think the photo is taken! We had a friend do that to us recently, too. It stinks when you realize it later that night and don’t check the camera right away. Anyway here is our non-self portrait. I cropped it down since we took up about 10% of the horizontal frame. I have no idea what that white flare is at the bottom – it isn’t snow – not in Florida! It actually put flare bubbles all over us so I had to burn the photo down a bit in PhotoShop. Enough of my rant and here is the photo: 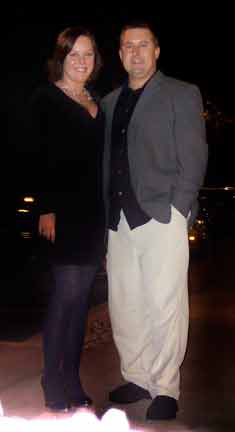 I really wish you could see my patent leather Charles David shoes – they are hot!

So we moved on from dinner to Universal’s CityWalk to check out Blue Man Group. They came to Orlando in June and we meant to go see them for Chris’ birthday but we forgot. So I bought the tickets about a month ago or so.

If you haven’t heard of Blue Man Group – they preform in Vegas and the play percussion on pipes and paint filled drums. They are pretty interactive with the audience, too. We were laughing throughout the whole show!

Here is a preview of what we saw (this was at a touring performance – ours was much better since the theater at Universal is much smaller and they have a great stage. There are two upper stage areas for the band and the band wears these cool black outfits with paint that reflects with the black lights making them look funny!):

The mass of toilet paper is awesome! 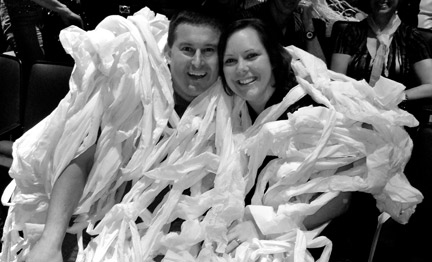 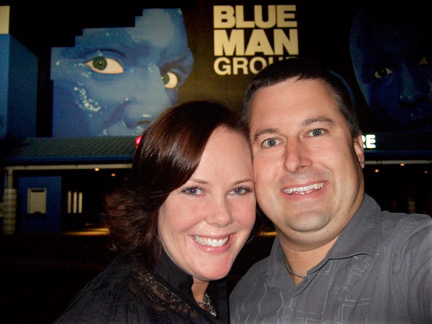 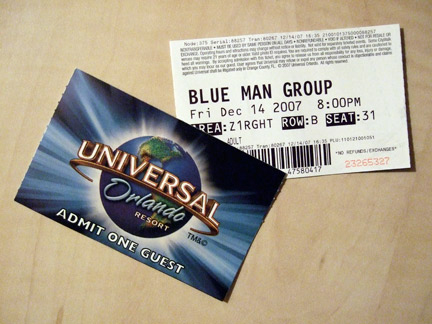 And a fun self-portrait montage will all three guys from Blue Man Group: