Well we made it to the first Gator game of the season, and it’s the 100th season of football at the University of Florida so they had the 1996 National Championship Team on the field to kick off the season. We were luck enough to get 2nd row tickets in the North end zone so we saw many of the old players on the field.
One funny thing that happened was that some kid came down to the front row and started yelling for Ridel Anthony to get his autograph. The problem was that the guy he was yelling for was not Ridel Anthony it was Fred Weary! It was pretty funny.
This is a photo of Fred Weary taking a photo of Jaquez Green with Albert and Alberta on in the endzone durring the game. 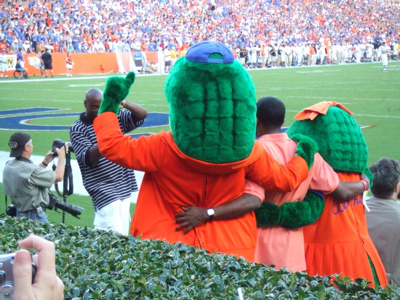 Then we ran into one of the 1996 players and Sandra got a photo of his ring: 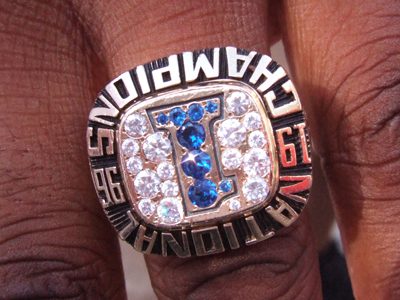 We got to see some old friends before the game and because we were in the end zone we had some good action right in front of us! Here is a short video of what we saw at the game: