This is the very detailed post about booking a flight from the US to Europe and taking your dog with you. For a much shorter post with just the highlights you need to know, click here. 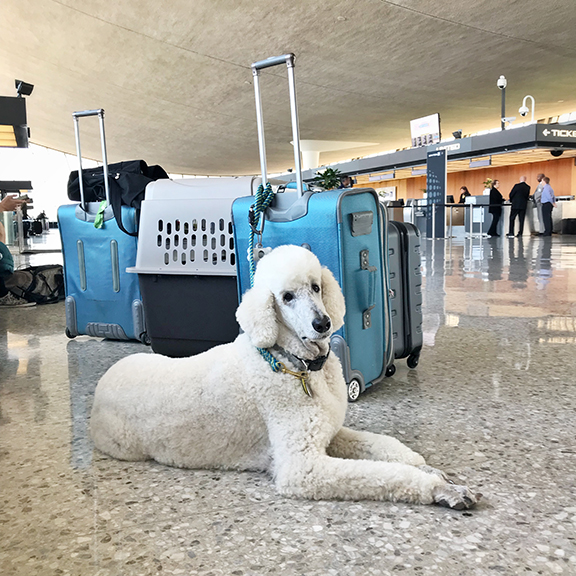 When we decided we wanted to move to Austria we had to figure out the logistics for our dog James. James is part of our family and we weren’t moving without him!

The first thing we needed to do was figure out the requirements for moving James to Austria.

I did some basic research online and then just to make sure I was doing everything properly, I called the Austrian Embassy in DC. They were very helpful and sent me the proper forms I needed filled out from our veterinarian. I read that the paperwork had to be filled out by a USDA veterinarian. So I called our local vet. I asked the receptionist if this was something Dr. Morgan could do and she said â€œYes, he does this all the time. What country are you visiting?â€ and she knew all of the right things to say that put me at ease. I just assumed (we all know assuming is never, ever good to do) that Dr. Morgan was a USDA vet.

The appointment at the vet had to be within 10 days of travel. We were leaving Monday, September 25th so I decided to make the appointment for Wednesday, September 20th. Learn from me: make this appointment on exactly 10 days out or at least on a Monday so you have all week to get your documents cosigned by the USDA. More on that later.

James and I walked down to see Dr. Morgan on Wednesday. The appointment was long but simple: Dr. Morgan just had to fill out a lot of paperwork. James needed to be microchipped (he was) and the microchip has to be put in and recorded by a vet. And James needed proof of all of his rabies shots. James also needed a dewormer pill and Dr. Morgan gave that to James. 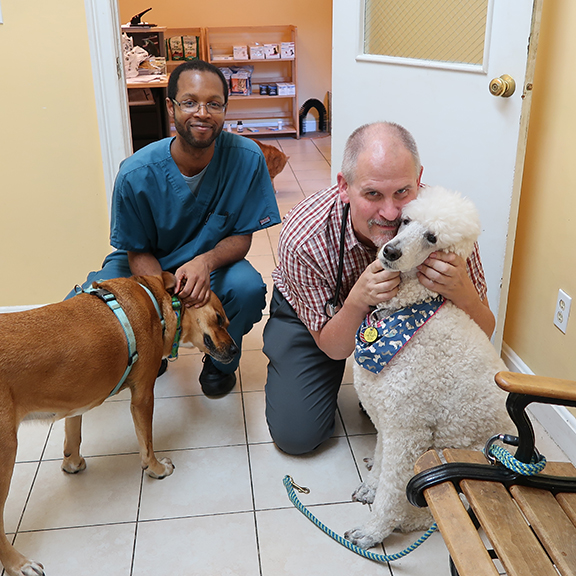 At the end of the appointment, Dr. Morgan handed me a set of paperwork and said â€œNow you have to go to Richmond and get this co-signed by the USDA.â€ Um. What? Richmond, VA is a three hour drive from DC. Wasn’t there someone here in DC? Nope. The other option is to FedEx the papers to Albany, NY. Remember I said to make your appointment at 10 days out exactly? Well, this was Wednesday at 4pm. I practically ran up the hill to our house and called the USDA office in Richmond, VA. The woman that answered said they had an appointment on Monday. What?! We leave Monday!! I asked if she had anything tomorrow (Thursday) or Friday and she said â€œwe are closed on Fridays and I don’t have anything tomorrow.â€ Oh no. I was freaking out at this point. I told her we were leaving Monday – was there any way I could come in tomorrow? She said to come at 1:30. Whew.

So here we are packing up our apartment and trying to move out and now we are going to lose and entire day driving to Richmond, VA. I don’t drive much and I have been stressed about the move so I asked Chris to go with me. No one explained what this visit to the USDA office entailed. Do we bring James? Do we not bring him? I assumed (again, never assume!) that it would be like a vet visit where a vet would check James out and look over the paperwork and then sign it. We headed to Richmond and the address for the USDA office is right downtown – a big government building. We all walked up to the security checkpoint when the security officer said â€œdogs aren’t allowed inside the building.â€ What? This was yet another surprise. Apparently it was a surprise for everyone else with appointments. There were several dogs and people hanging out in front of the building. Good thing Chris was with me – it was 87 and sunny and HOT in Richmond that day. I couldn’t have left James in the car. He would have died from heat exhaustion.

Once inside, I signed in. The room is very small and has 6 chairs. I arrived early and lunch is from 12-1:30 so I sat in the tiny room with a man moving a horse to Canada. It was dark since most of the lights were out. At 1:30 the lights came on and the woman working starts calling names. You hand your papers under the glass window and she takes them away. No one comes out to ask about James or to see James. It is just someone in the back looking over your paperwork. And they are extremely detailed. James was neutered on one day and microchipped the next. It was done by a vet in Orlando who is probably retired now and everything was hand written. It was a little hard to read his handwriting. Dr. Morgan read the paperwork from Orlando as Feb 10, 2011 neutered and Feb 11, 2011 microchipped. Well, the USDA read it as all being Feb 10, 2011. So the woman told me they might not be able to process the paperwork because the dates were wrong. Argh!!!! So I sat there trying not to freak out while someone in the back that I didn’t even get to talk to worked on this. Thankfully, they decided to note that Dr. Morgan had the wrong dates and they signed off on it being corrected. Whew.

Another dog owner in the waiting area was not so lucky. The dog was bought from a puppy mill and the dog had been microchipped by the breeder and there was no official record of it. The dog HAD a microchip and you could scan it and see that. But since there was no official vet record of the microchip date they were saying that dog probably couldn’t go to Germany. The dog’s family was already in Germany and when they went to get on the plane at Dulles the dog was turned away. They got on the plane and called this woman to come get the dog and work out the problem. Wow.

With our USDA papers in hand, we headed back to DC.

We were putting James under the plane and we bought a crate for Labrador Retrievers and Golden Retrievers. You do need to call the airline to book cargo space on your flight for your dog. We had done this with Austrian Airlines. Austrian didn’t send us any kind of paperwork or documents about what we needed. But we had seen on their website that dogs need to be able to stand up and turn around in their crate. James is a 65 pound Standard Poodle and he could stand up and turn around in the large crate.

The crate we bought was size L from PetCo. It is the brand You&Me and it was a Premium Kennel. When flying with your dog you have to have air flow on all four sides of the crate. Many crates sold only have air flow on three sides – not the back side. Don’t make this mistake and buy one without a vent on the back side!

On Monday morning we were ready to fly out of Dulles. I was nervous about James but I knew he loved his crate and he would curl up and sleep for the whole flight. He is a mellow dog and I knew he wouldn’t need any medication. I gave him some Bach Rescue Remedy drops (and I took some, too!) when we arrived at the airport and again as we went to check in.

Here is where I want you to learn from our biggest, most stressful and most expensive mistake: When we went to check in at Dulles the check in crew kept making faces (not good ones) at James. They were scrunching up their faces and saying â€œI don’t knowâ€¦.â€ in a disapproving tone. But then other check in agents were upbeat and saying â€œNo, it is fine.â€ and smiling. We didn’t know what they were talking about. We got all checked in and then an agent said â€œI don’t think that crate is big enough for your dog.â€ What?! So she asked James to walk into his crate and turn around. He did. She went in the back and was gone for about 20 minutes. Then she came back and said â€œI need to take a pictureâ€ and she pulled out some crappy cell phone and took a picture of James standing up in his crate. She was gone for another 40 minutes and said â€œnow I need to take videoâ€ and pulled out her phone again. Then she was gone for another 40 minutes. We were starting to worry about making our flight – this was taking SO long! She finally came back and said â€œThe crate is too small. You can’t put him on this flight.â€ We were stunned. I said â€œWhat do we do now?â€ and she said â€œThere isn’t anything you can do. Your flights are non-refundable. Call to rebook new flights.â€ and that was it. We said â€œWill we have to pay a fee to rebook our new flights?â€ And she said â€œYes.â€ It was nuts. If they would have said â€œGo buy a bigger crate and we will try to get you on a flight tomorrow or the next dayâ€ we would have raced out to do that. But they weren’t helping. At all. No matter what, our $1400 per person flights today were a loss. And we would have to book new flights for this week. And the last minute going rate for a flight out of Dulles this week was $3500 per person.

Here is James and his crate to give you an idea of the size and so you can see what is considered too small:

Once James was denied boarding THEN we see paperwork that we had yet to see (this should be on their website and it should be emailed to you when you book pet cargo space): 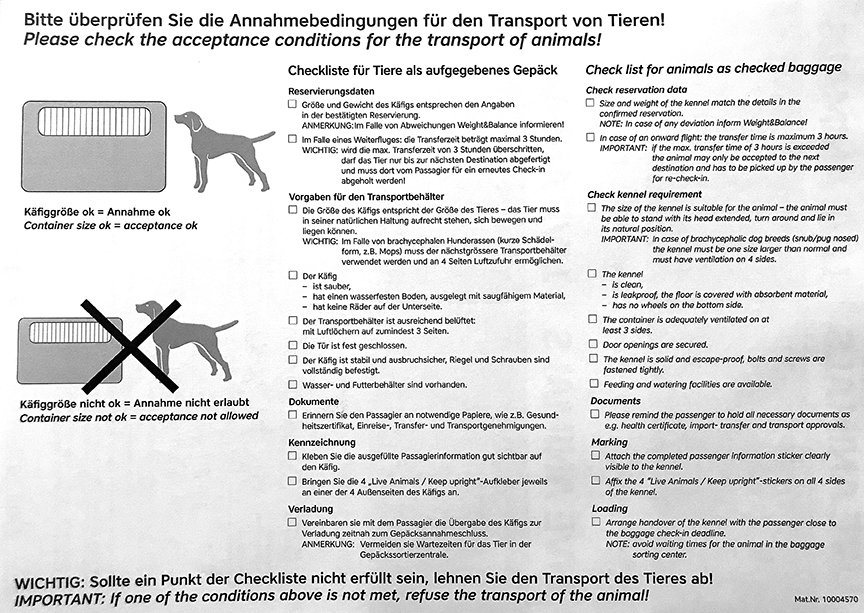 We called a friend with an SUV to come and pick us up (thank you Ginny!). Our large crate is too big for any cab or rental car. What we did realize is that a mini van rental is the way to go with a very large dog crate!

This was James while we waited for Ginny to pick us up. Poor James looks so sad. We were all so stressed at this point. We now had a plane that was flying to Austria without us, no new flights booked, no apartment to go home to (we donated all of our furniture, our mattress, kitchen stuff, etc) and no car (our car was put into long term auto storage). 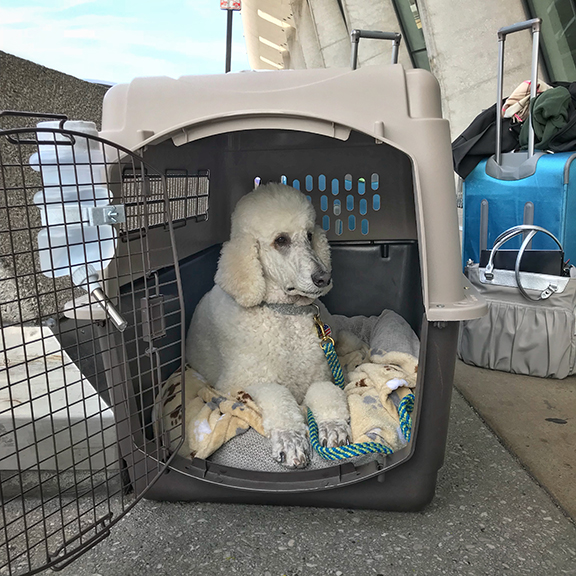 Once we sat down and shook off the shock of not being allowed to board the plane, we booked a minivan car rental for James and his giant crate and we booked a hotel (Aloft is amazing by the way – no size requirements for dogs!). We were able to book new flights that were somewhat reasonably priced for last minute flying out a week later.