We decided to head to Provincetown at the end of the cape. We had heard it was a really neat place to visit and that they had some good restaurants so we planned to have lunch up there. The drive was fairly non-eventful because we took highway 6 up there which is basically like a two lane interstate type road with exits and nothing but trees on either side. Great if you want to get somewhere quickly, but not fun if you are trying to see the towns. We decided to jump off of highway 6 as we got closer to Provincetown just so we could see the area and although 6A had more stops it was a much better drive. We passed a small winery, plenty of quiet neighborhoods and a few eye openers like this: 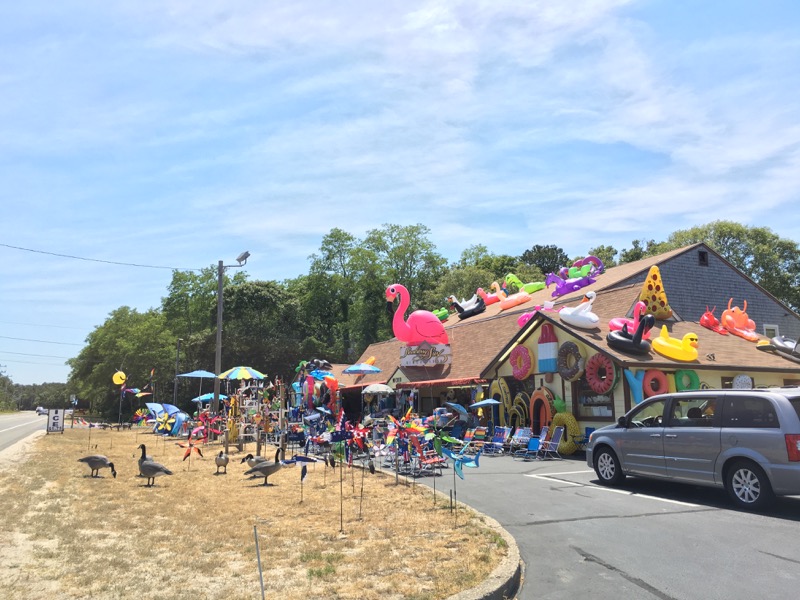 Need a raft? It was sometimes hard to remember that we were near the beach because we just never saw it as we drove around. And somehow I think this place would fit in better in Panama City Beach, Florida.

We pulled into Provincetown which was very small and began hunting for parking. We lucked out and found a spot and were able to pay for a few hours of parking so we could explore. There were not many parking lots available and there were quite a few people trying to get our spot because they thought we were leaving.

We wandered into town and found more kitschy shops and a bunch of restaurants with out door seating. This was good, we asked one if James was allowed to sit with us on their patio and the hostess said, â€œof courseâ€ so we told her we would be back. We were still exploring, but this one looked like a good option.

We headed to the beach to see what it was like. The sign said that dogs were allowed off leash between 6am and 9am and also between 6pm and 9pm, so because we had a leash we were good. (And because there were 4 dogs down the beach playing without their leashes.) In front of us was a small harbor, the water was perfectly clear and there were two people paddle boarding. The sand was a little course, there was some seaweed on the beach and a few people enjoying the sun as well but it seems that the main thing people do here is the Pier which was packed.

We opted to skip the pier in favor of lunch and there was a nice place overlooking the beach. Unfortunately to get onto their deck you had to cut through the door into the building which is typically a sign that no dogs are allowed, so we headed back to the first place that we checked with.

As we walked up the hostess was watching us and we said, â€œOk, two for lunchâ€ and she replied, â€œOh, unfortunately our two dog tables are now takenâ€. What? That was never mentioned before and she gave no option for how long to return. Annoyed, we left to find another place.

We were about out of options when we found an Italian place set back off of the road with a nice patio. They had no problems with us bringing James to their patio so we headed in. It was a nice quiet place and James passed out on the patio almost instantly, the poor guy was tired from playing in the pond and driving all over.

Lunch was good, but we were still in search for some seafood because, technically, we were at the beach.