We woke up 10 minutes before our alarm. The pups were in need of water because that’s the first thing they found when they left the tent. They nearly finished a half gallon of water before they slowed down. Funny that the same bowl of water was out for them before we took them into the tent, they must have been tired.

After walking the dogs we returned to the campsite to pack up. As I was attaching Goblin’s leash to the picnic table I noticed Duke in his hunting stance staring at a chipmunk about 5 feet away. 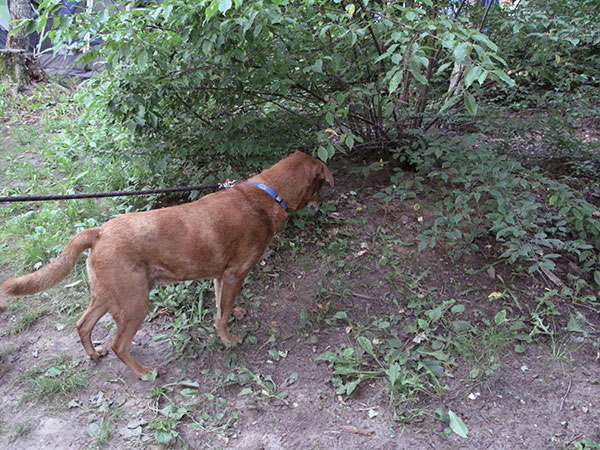 We got him tied down before he could lunge at it, but he instead just stood there watching what turned out to be a family of five chipmunks. We watched for a minute as one of them ran right up to Duke (within two feet of him) and dove into a hole which was apparently the nest. Then Duke started sniffing like mad they were starting to get him. Goblin on the other hand just lay quietly watching the chipmunk fiesta as they ransacked our neighbor’s screen tent, stealing all the food they could manage. These people had basically moved in, they had a microwave oven, coffee machine, portable electric stove and bags of chips and other great chipmunk bait all conveniently stored in a nice screened canopy to keep the bugs out. To bad for them the bottom of their canopy had perfect chipmunk sized openings in the screen that was making this chipmunk onslaught possible. 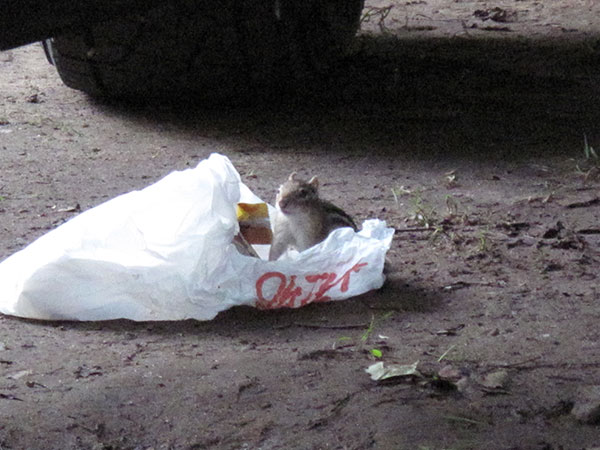 We continued to pack everything while we laughed at the pups as they started to get more excited and frustrated over the growing chipmunk numbers in front of them. When we finished packing Sandra headed off to get a shower and I sat at the picnic table to finish some email. While my computer started up I looked over to see Duke and Goblin standing side by side with about 4 chipmunks playing near a tree a few feet away. Then one chipmunk made a run for the hole and Duke in one movement lunged for it, knocking Goblin out of the way and dragging the picnic table and me about 6 inches. I’m really glad we went for the heavy duty leashes!) I couldn’t stop laughing, these tiny creatures were driving him nuts and he was whining and dancing. Each time a chipmunk came near he tried something new to get to it. He tried low crawling, pulling, jumping over Goblin for a better angle, anything he could come up with. If this was a contest for best effort he would have won.

Listen to all of them squeaking in this video!