We drove for miles passing nothing but trees and when we finally stopped for gas at the first place we found it was out of gas! This can’t be good… Just as we were starting to worry we found a truck stop with food and gas. We picked up lunch from Lick’s which is a Burger place that tries to be homemade. Each burger is customized and their system is very similar to how Subway does their subs. One person does the toppings, one does the meat and packaging. Speed is not their strong point but the food was good and very big! The sandwiches were so big we had to pull over to eat them.

After eating the huge burgers, all we did was drive and look for Moose. We still haven’t seen one and this is a huge stretch of nothing with Moose warning signs everywhere but so far no Moose. Then all of a sudden Sandra spotted two really big somethings off in a field to the right. I slammed on the breaks so we could see what they were. We were the only ones on the road so I backed up to a better viewing point and pulled over. I’m not sure what they were, but they were huge and I don’t think they were Moose. Here’s a photo of them, this is as far as the zoom would go. 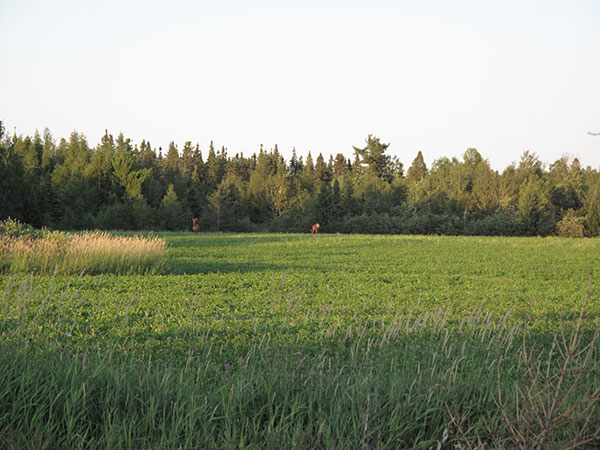 There were no other sightings at all after that, we stopped into a small gas station where I bought a small maple leaf sticker for my rear window and we started West from Sudbury to Sault Ste Marie.