While we enjoyed our dinner we started to notice that all of the people walking down the alley way were stopping to look at one specific window display out of several that a store had along the alley It was almost guaranteed that someone would stop. We noticed and our waitress noticed. It was very strange. Finally I couldn’t stand it, I had to see what was in the window. As I was on my way over our waitress noticed me leaving so I told her I couldn’t stand it I had to peek. When I got to the window this is what I saw 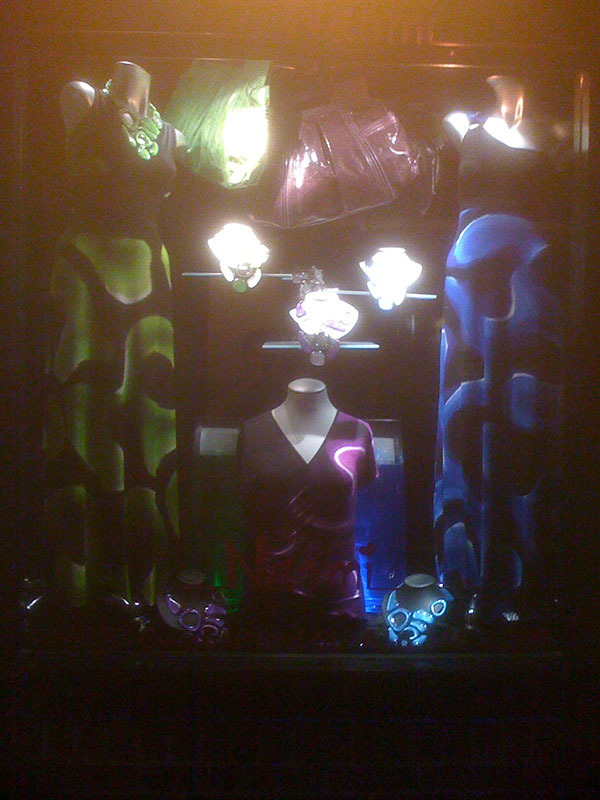 Sorry for the poor quality photo

it was really nothing special on its own but all of the other window designs were not as dark and contrasty as this one so maybe that was the attraction? Either way when I turned around there were 10 other people all looking with me, the entire restaurant had to see this as well. I had cleared out all of the staff and just about everyone seated outside! Needless to say we were not all that impressed when we got to the window but instead we were all more curious why everyone stopped there.

I returned to our table to find Sandra talking to a nice couple who had stopped to see Duke and Goblin. Our dogs had a magic effect on people. We chatted with them for a while, they lived only a few blocks away and had left their dog at home. We chatted about the city life, having a dog, etc. These were totally the kind of people we would hang out with if we lived here.

On our way out of Michelle’s we passed a bird cage with a ring neck dove in it. Duke had smelled something in the cage earlier but had not yet found the dove at the top of the cage. There were two girls talking to Sandra about the bird and acting strange, bird people are often more strange than cat people. That’s when Duke spotted the bird! Time to go before Duke has a squab appetizer!

I love YOU! Thank you for being my friend and Hap

Only my nose needs a pillow 🤪