After our laundry was done we headed down to Kensington Market. We heard it was the thing to do on a Sunday and it was Sunday after all. But when we got there we decided not to stop. It was a mix of Canal Street and an outdoor farmer’s market. It was probably a fun time but just not what we were looking for while we were in town. We will have to come back to see it some other time.

Instead we headed down the street to find a few home decor stores that Sandra had seen online. The Magic Pony and Fluid Living, not stores we have back home. The pups and I waited in the car while she did her shopping and when she came back she surprised me with a potato pizza! 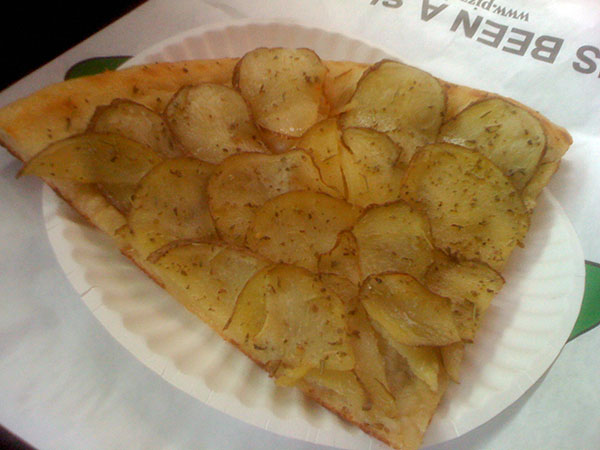 How cool is it to combine two awesome things like that?

As Sandra was getting into the car I noticed this wacky lady walking down the sidewalk toward us. She had lipstick all over her mouth and a big red lipstick dot on her forehead. She looked like a bad clown. As soon as Sandra closed the door to the car the clown lady was sticking her hand in the window with two quarters saying, “I just want some pizza.”

Yeah, me too. But Sandra was polite and said, “No, please leave us alone.” which didn’t happen. Next thing you know the clown lady had both arms and her head in the window petting the dogs in the back seat. That’s when I rolled the window up on her. Yeah, she was still in it, too bad she was fast enough to get her hands out, but I was done playing nice.

Oh, you should have seen the look she gave me! Nobody had obviously treated her like that before. And nobody obviously ever gave her the, “I’ll cut you” look that I shot back at her either. It’s funny that our dogs are not aggressive over their food when they are eating, but I am! If I’m trying to eat you should probably keep your distance, I like to eat my meals in peace.

I’m not sure how it works in Canada but in the States I don’t think it would be illegal to lay someone out for acting like that. We said, “go away” and she nearly climbed in the car. In Texas that would probably get you shot. Good thing for her we weren’t from Texas!