We pulled into the downtown area of Kingston around 5:00 pm and parked a block away from Pan Chanco which was the restaurant we wanted to try. As we walked over with the dogs we passed tons of neat little shops, but all of them were closing because it was 5:00 pm. Unfortunately Pan Chanco had closed at 5 as well.

We decided to keep walking around to see what else we could find. There was an Irish Pub, and English Pub, a German Pub. they had the Pubs covered. We then took a shortcut behind City Hall, there was a huge open market area which had… closed at 5:00 pm and all of the tents were being taken down. But there was a band in the amphitheater playing jazz and they were really good. We stayed for a few songs then set out to find a restaurant. 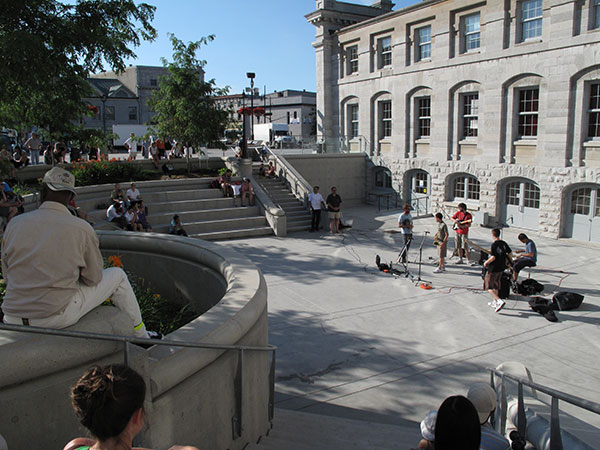 We chose a nice little place with outdoor seating and asked if the dogs were OK. They told us “yes” but they would have to be on the outside of the fenced area. In other words, they were OK as long as they were left outside on their own.

Not dog friendly apparently. So we headed out to find another place and just around the corner we discovered Chez Piggy. They were dog friendly and Duke and Goblin were able to lay under our table. But something wasn’t right, from the time we stepped into the place Duke was pulling like a fool, diving under chairs and into the plants. He was going berserk and we didn’t know why! 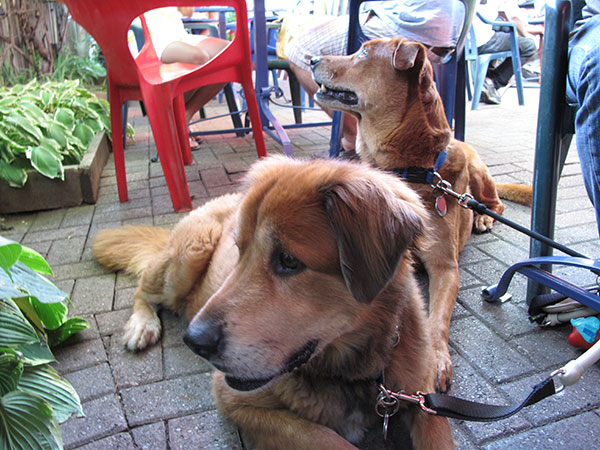 After we wrestled him down to the ground and tied him to the table a waitress came over and told us they had a visit form a loose ferret earlier in the day and she was pretty sure it was gone but wanted to let us know.

Thanks… now all I had to do was get my dog to stop his hunt and we could all enjoy our dinners. Of all things a stupid stinky ferret!

I reached down and “bit” both Duke and Goblin (Caesar Milan style, only harder) and they were back to normal. They were still sniffing but they were now lying calmly at our feet.