The alarm went off at 8:00 am and Duke was ready to go. Because we were in a hotel and two blocks away from any grass we had to get ready to go as well. We walked the pups back to the park that we had found last night and as soon as we hit the grass they did their business. At leas they know to use the grass and not the concrete where it makes more of a mess. 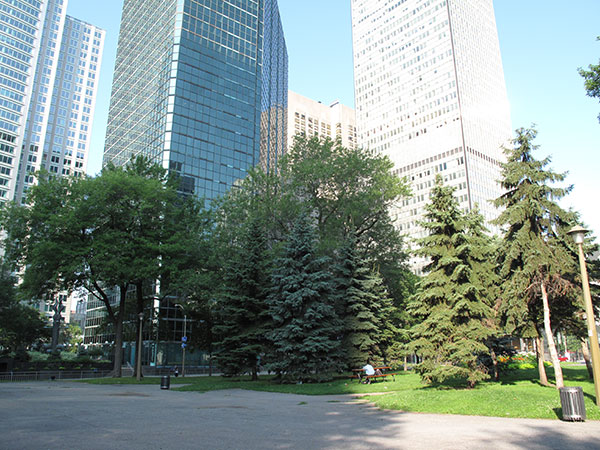 We spent more time walking the park since we were up and about already and that’s when Duke spotted a squirrel and nearly took my arm off trying to get to it. After getting him back to his senses we headed back toward the hotel in search of an outdoor cafe for breakfast.

The problem we had is that there were not too many outdoor places to eat in this section of town, but we were getting hungry so just about anything would do if we could take it to go. We wandered around for a block or so before deciding to ask at our hotel to see if they had a pastry shop or a Starbucks nearby. (We had seen two Starbucks in the area on our drive over last night) As it turns out there was a Starbucks in the lobby all this time! To make things easier we had gone to the ATM on our way back from the park so we now had Canadian money instead of having to use our debit card for everything. This made everything much easier although almost everyone would take a MasterCard or Visa.

On our way back up to the room we decided to peek into the pool area. My back was still in bad shape so a soak in the hot tub could be a great help. The dogs were not allowed in the pool area so Sandra was going to take them to the garden area outside while I hit the hot tub.

The pool area was packed, there were people swimming and playing and lounging in the pool. The entire gym was full of people running and cycling, this place was popular and it was 8:40 am! Every hotel we had ever been to never had anyone at the pool. Apparently all of the people that go to hotel pools stay at this hotel in Montreal!

Because of the crowd and that we were getting closer to our noon checkout time I opted for another shower instead, for some reason I still had a coat of purple-brown dirt on me that made me look a little bruised. I’m not sure if it was from my sleeping bag or the floor of the tent but my arms and shoulders looked as if I had been roughed up. I’m still not sure where it came from.

Goblin waited on his dog bed as we packed up our stuff. We were headed to Toronto today so I had to go to the parking garage and reassemble the roof bag to make room for everything else in the car. It was a warm day and all of my pairs of shorts were dirty. So I was wearing the jeans I had packed expecting some cooler weather up here. It wasn’t uncomfortable but it wasn’t really cool out like I was really hoping for.