We headed out of Montreal on 20 Ouest until we (and everyone else in town) discovered that 20 Ouest was closed and there was no work being done for as far as we could see. Maybe there was a strike which is something Canadians do very often but the traffic for three highways now had to merge into one and then follow a detour around the “construction”. The traffic was terrible.

After about 40 min we realized our 5 +/- hour drive was going to be much longer so we punched in a restaurant we had heard about in Kensington and followed Tom Tom out of the traffic.

At some point along the highway we were getting hungry. With 2 hours left before Kensington we pulled into a PFK. (It’s the French version of KFC) 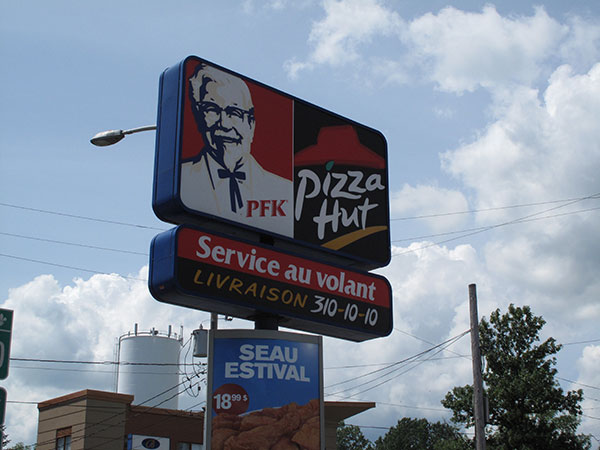 I went inside and stood in what may have been a line but felt more like a crowd. The entire time I was there nobody was ordering, the girl behind the counter was running around like a fool and the crowd seemed just as confused as she did. We bailed on that plan, we would just have to wait until we hit Kensington around 5:00 pm.

As we got further from Montreal the street signs began to have English on them as well. First below the French, then above the French, then the French disappeared all together. It seems that Montreal is the main concentration of French Canada, or at least it is for our trip.