Finally we hit the line to go through customs at the Canadian border. 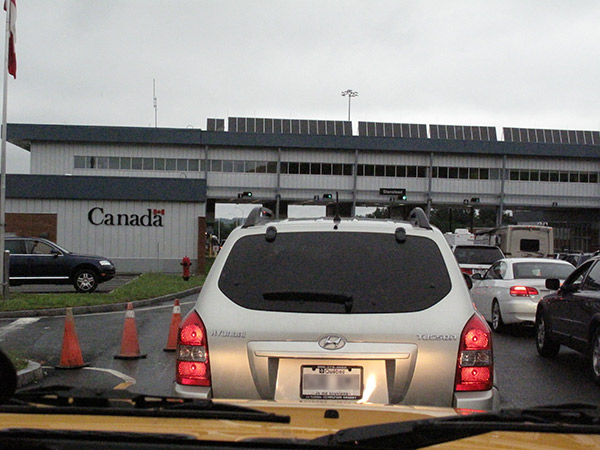 The line took about 45 minutes and we were able to watch the US border patrol on the other side of the highway. They were turning away an older couple because they had firewood. Apparently there is a big beetle thing going on so traveling with firewood is a big No-No. It got this couple denied at the border. So we were worried about what the Canadians might have in store for us!

We pulled up to the window and handed over out passports. We had prepared all of our paper work and the dogs records were, unfortunately, on the roof of the FJ. They asked us what brought us to Canada, anyone else in the car, what kind of dogs, any alcohol (I told them we had 3 beers left) then this…

-> Do you have any weapons in the car?

WOW! You’d think he would have asked about firewood! That’s what the old USA is concerned with…

So we made it! On the highway to Montreal, Quebec and our first time on the Eastern side of Canada. Then we noticed the street signs… The speed was in kilometers, it took me a minute to find the kilometers on my speedometer. The real shocker though was that all of the signs were in French. ALL of the signs.

We started to worry a bit, but good ole Tom Tom was still speaking English so we would still be able to find our hotel. As we drove we started to learn a little more French. Nord, Sud, Est, Ouest and Arret (stop) at least we were learning the street signs, but we still had no idea what the blinking green light meant, hopefully we would find out on this trip.