We pulled into the glass shop at 7:56 am for our 8:00 am appointment. We were the first ones there and anxious for them to get started because it was apparently a tough replacement process.

At this point I had two rush jobs due ASAP today and only needed a plug to get my work done. Not long after they started on the windshield they let Sandra know the windshield was out. (She had asked because she wanted to take a photo of the car without the windshield.) 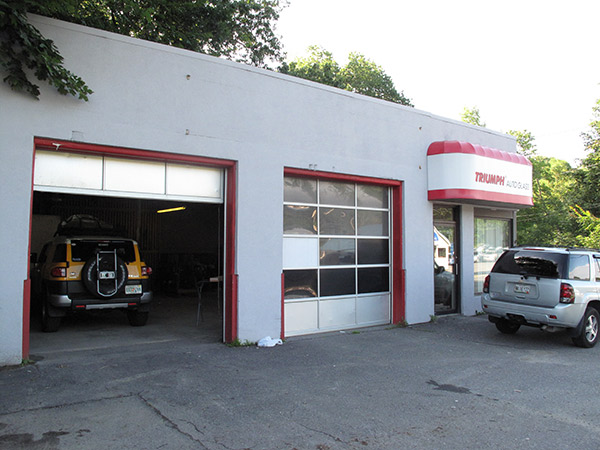 That’s when we realized why it was a tough install. They had to remove the wipers and all of the panels above and below the glass to get the windshield off. It seemed like more work than it should have been, so it was a good thing they were doing it instead of me.

With about 5 min. of work left on my jobs, the car was done. It had taken almost exactly the two hours they estimated. The pups had a nap on the rug of the shop the entire time but we were in need of more caffeine and now I needed an internet connection to get my work delivered, so we headed out of Augusta on our way to Montreal, Canada.

From the map you would think that there was nothing in this area of Maine but trees and a strip of asphalt but we continued to come upon small towns and around noon, eight hours after we woke up, we found a Friendly’s for lunch with a free Wi-Fi connection.

I really wish the whole world could work with PDF’s. I’m not a big fan of Adobe but the PDF has finally grown on me. I printed out my completed jobs (printed as in made them PDFs) and emailed them out. The whole process took less than 10 min and I was done for another week except for hitting a FedEx to print and mail the originals later. If you are on a PC you can get a really good (and free) PDF printer driver by visiting www.CutePDF.com then when you go to print something choose cutePDF as the printer and you’re done! (If you’re on a Mac it’s already built in, but you probably knew that.)

I really like Friendly’s, they are just so… nice and their food is very American. Think Denny’s menu, but with an ice cream shop as part of the deal. We split a honey BBQ chicken sandwich and had a Cookie Dough/Chocolate Madness and Reece’s Sundae to finish us off.

Then we were back on the road.