As we continued through Portland we noticed a really cool pedestrian suspension bridge and pulled over to check it out. As we were getting the dogs out of the car I noticed a HUGE splash under the other end of the bridge! There were a bunch of kids jumping into the river from the bridge, having a great time, this we had to see!

As we were walking across the bridge, a kid and his older brother were walking over as well. Apparently this kid does this jump every day. We also learned that there was a big writeup in the paper about how they are trying to stop the kids from jumping from the bridge. Why does someone always have to spoil the fun? 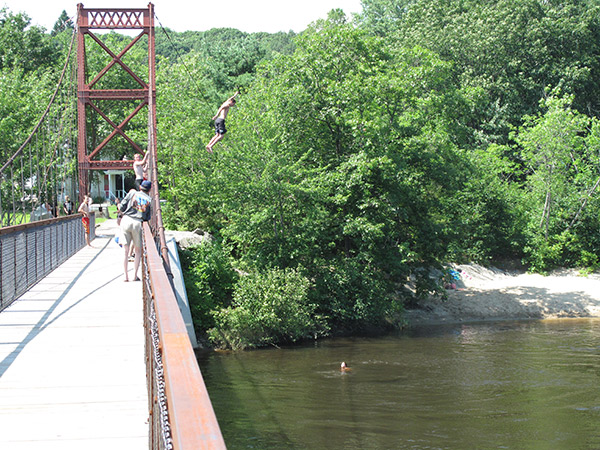 While we were there a cop showed up and asked that the kids not jump from the bridge. He was nice enough, but our dogs wouldn’t even let him pet them, they know a party pooper when they see one!

As we left the kids made sure the cop was gone and started jumping again. Good for them! Actually what they were doing was not illegal, all he could do is take their names and go find a doughnut hole to share them with. It’s too bad people can’t allow someone else to have fun. 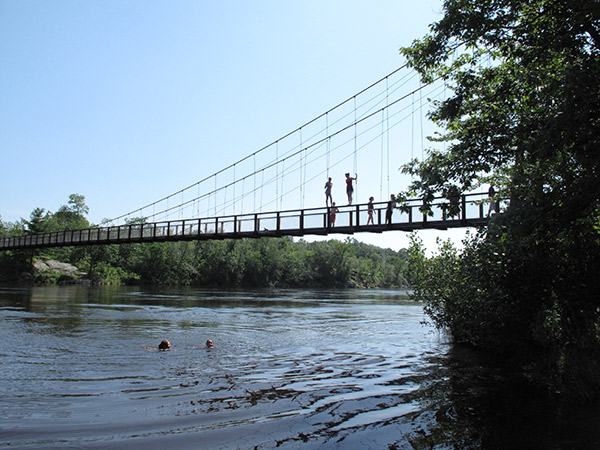 While we were on the bridge we were talking to a group from the Carolinas. They were shocked when we told them we hadn’t had any lobster in our trip through New England so we decided to get some to see what all of the fuss was about.

We checked on Yelp.com to find something close by that had a good rating and it recommended the Sea Basket, 3 min. ahead. Plenty of fried greasy stuff and very highly rated, so even though we were not very hungry we decided to give it a try. We pulled in ready to eat and discovered an empty parking lot. 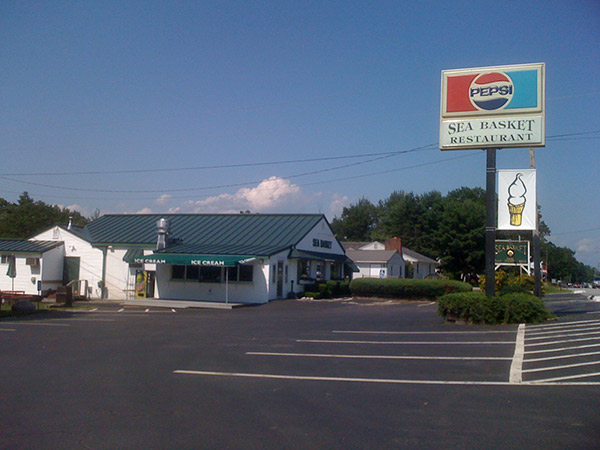 Apparently they are closed on Tuesdays.

Well not to be outdone we consulted Yelp again and found Red’s Eats and Sprague’s in the town of Wiscasset, just up the road. Both were rated highly and they were across from each other so one of them had to be open.

Wiscasset was really cool, there were some shops along the highway and we pulled in to check them out. Besides the line at Red’s Eats was pretty long so we decided to wait for it to think a bit.

We found Rock, Paper, Scissors where we could pick up some journaling books for our offline blogging, then headed down to Sprague’s because Red’s line hadn’t changed much. 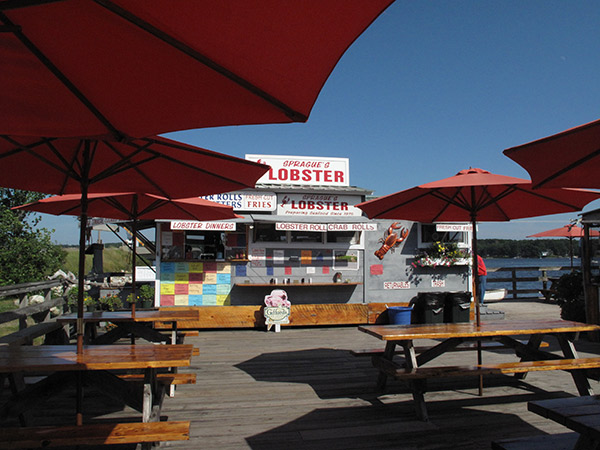 The big thing seemed to be the lobster roll, but we didn’t know what that was. We were thinking sushi, some sort of burrito or something along those lines but that it actually was is more like a hot dog. Basically a bun stuffed with lobster meat. It was awesome! 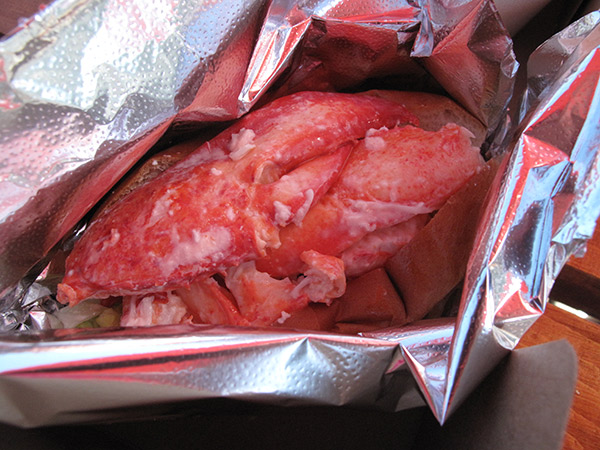 While we were waiting for our food this kid walked over and asked what kind of dogs we had. (This was becoming a very common question) I told him they were just dogs, he just smiled. If I didnt know better I would have thought this kid was in his late 60’s, he had more people skills than ten kids his age. We talked with him until his order was ready and he said goodbye and headed off to eat. (I think his dad ran the coffee shop on the boardwalk.)

When our food was ready we went to a table overlooking the water, our view was great, we were really glad we chose this place because it had shaded tables, the lobster stand an ice cream stand and a few other shops. It was also very dog friendly.

After eating we wandered around the boardwalk and talked to a lady that ran a shop selling decorative glass. She said the weather today has been the best weather they’ve had in a while. She also told us about a friend of hers that lives in Florida and spends her summers in Maine working a summer job to get away from the heat. Hmmmm…