Our game plan for the day was to drive to Suncook, New Hampshire. We were staying in Bear Brooke State Park tonight and we had plenty to see along the way

Our first big stop was Boston and on our way in we realized that we probably get an entirely different view of the cities we visit than the average person. Typically our first stop is a grocery store. Not something you typically see in a touristy area. Next we hit one or two clothing stores if it’s a city that has a store that we don’t. After that it’s driving around to see what we can find that looks like fun and on this trip that includes Dog Parks!

Our first destination in the area was Harvard University, the oldest university in the country and to be honest it looks like it was built yesterday! The buildings are amazingly well kept and incredible to look at. I think I’m a little partial to Brown’s campus layout, but this is Harvard and it’s something worth seeing. Near the campus on our way to the dog park we spotted a church that had a sign saying that it was built in 1633. That is pretty impressive as most of the buildings around it were much newer, and we all know (or at least you should) that the Declaration of Independence was signed in 1776 when this building was 143 years old!

Just a few blocks from there we should have found a dog park but the only park we could find was not fenced and there were no dogs! Time to head to the next park on the list.

When we found the next dog park we were glad to see that it was fenced. This park was really cool, it had canons (real canons) and some cool artwork inside. But as we pulled up we spotted the signs saying the park was closed! CLOSED, Walley World doesn’t close! So we got the pups hooked up and walked them around the outside of the fence. Turns out they were trying to re-grow the grass in the park, so nobody was allowed in until it was ready. 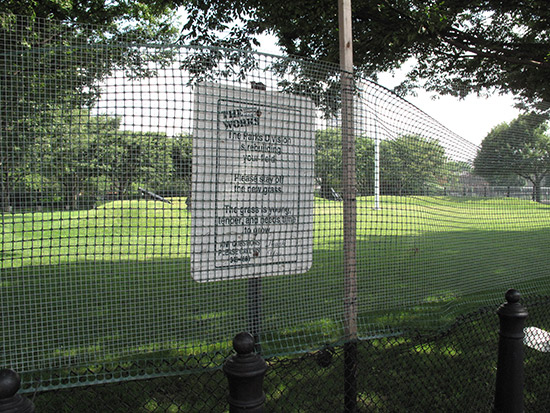 As we left the park we overheard some construction workers talking with thick Boston accents. They were almost a full block away and we could hear them clearly! Apparently the Bostonians from our campground were using their inside voices! What great lungs these people have.