At 1 am we woke up to a heavy rain. There was lightning in the distance and no wind so the only thing we were worried about was leaks. But at this point we were all so tired we just went back to sleep.

The alarm went off at 6 am, the rain had stopped and it was very quiet outside. We let the dogs out and walked around the campground. The Pocamoke river was across from the row of small cabins and it was as smooth as glass.

After breakfast we began reorganizing again, we thought the rain might come again so we had stuffed everything in the car overnight.

This was one morning when we were not in a hurry. Our next stop was Philadelphia and we planned on arriving around 5 p.m. when our friends Ann and Ryan got home from work.

We took down the tent (no leaks during the night) and cleaned the beach sand off of it as we went. We loaded all of the stuff into the car and for some reason we seemed to have extra space! We were not missing anything but somehow we managed to pack it all and still have extra room, we were getting better at arranging our stuff for sure.

Duke and Goblin made themselves comfortable for the trip. 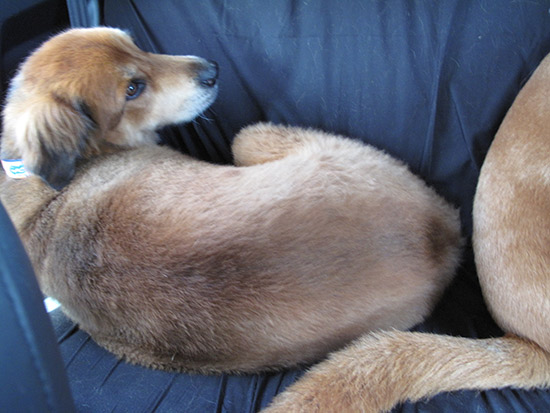 We stopped for showers on the way out of the campground and headed to Lewes, Maryland to catch the ferry to Cape May, New Jersey. We filled up with gas and bought a bag of ice before the ferry and were early enough that we almost caught the ferry that was leaving before out reservation time.