The rest of the drive was fairly uneventful. We stopped into Virginia Beach for Kinko’s (much better than bringing a printer on vacation!) and Wal-Mart for a sheet to cover the back seat for the dogs. It was great to see all of the Navy jets doing practice runs while we were in town.

Wouldn’t it have been great if we hit a dog park while we were in town too? Well we tried but none of them were on the way so we headed for First Landing State Park instead. The funny thing is, we turned too soon and ended up at Fort Story which is an active military base.

The first security guard came over, pet Duke and Goblin and told us we were at an active base so we had to go back out. He gave us directions, paused and said, “I want a dog so bad… ” (you have to smile at that!) We said thanks and were on our way. Goblin was in need of a break and some water!

The state park was about 5 miles further, just before the Chesapeake Bridge/Tunnel and was completely dog friendly. In fact they had the nicest doggie poo bags we had ever seen! 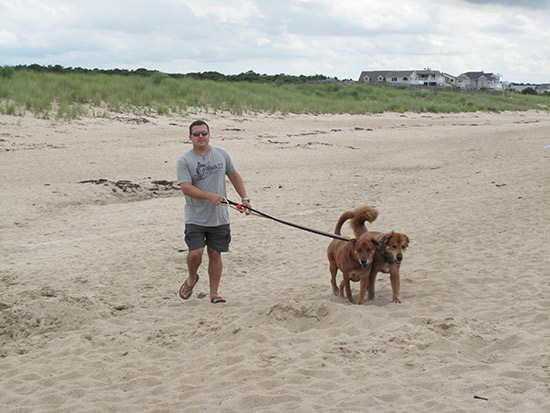 We had a run on the beach, and plenty of water and headed back to the car. This was one of our longer driving days to get us farther north so we could keep our schedule.