I think we were both so excited we didn’t sleep well at all but 6 am came and without protest we got up and began loading the car. Our goal was to leave at 8 am.

The biggest problem I had loading the car was the rain, especially since I had planned to put nearly everything on top of the car in a rain-proof bag. What this meant was that more things needed to go in the car because the rain kept me from having time to understand and organize the rain bag.

We ended up leaving around 9 am, but it was no big deal because we didn’t have a hard deadline at our first stop in Charleston, South Carolina.

On the drive up to Jacksonville, where we were picking up some things from Sandra’s Dad, Sandra was reading her Grandmother’s journal. (1936-1940) She read about her Grandparent’s courtship, wedding and the birth of her Aunt Barbara.

At one point I asked why everything she read to me seemed out of order and she showed me that the book was only 365 pages with a page for each day of the year, each page was lined with the top three lines being for 1936, the next three for 1937 and so on for the five years that the journal was to be used. At my first glance, I immediately saw this as the same format as the popular micro-blogging site Twitter.com where you only have 140 characters per post! Sandra’s grandmother was apparently far ahead of her time! 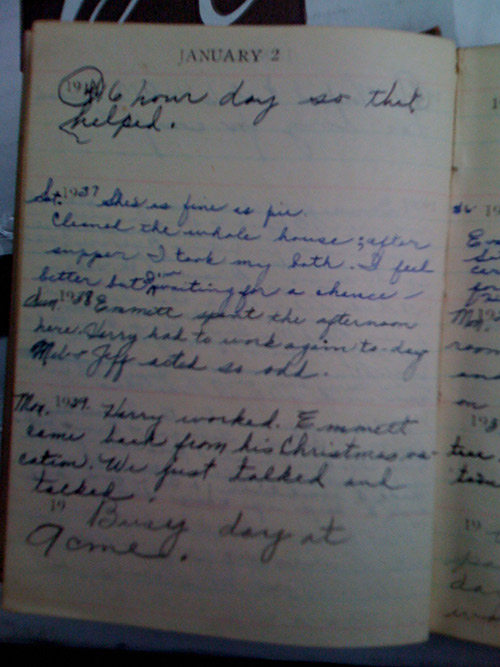