Since Google’s art today was about the first demonstrated flight of a hot air balloon that took place on June 4, 1783, I decided I too would post about hot air balloons. 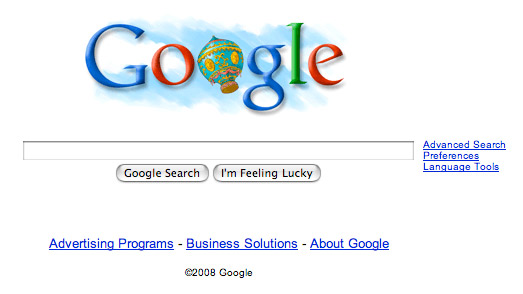 We went to Albuquerque with our friend and hot air balloon pilot Bob Wilamoski in 2004. He owns Bob’s Balloons here in Orlando so if you ever want a ride, give him a call!

And if you are ever in Albuquerque in the beginning of October, you are in for one heck of an experience! Hundreds of hot air balloons and a week full of events!

The evenings have an event called “Glow” where the balloons don’t take off, but they just show off how beautiful they are in the evening. They all are on radios to time the blast of propane that lights up the balloons.

Here is our self portrait during one night of glow: 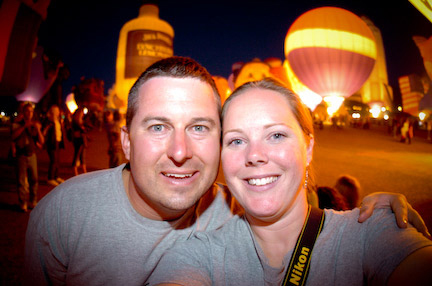 Then in the morning you get up before sunrise for Dawn Patrol. All of the pilots gather and they set off a small party balloon to check the wind.

Here is the dawn patrol group taking off before sunrise: 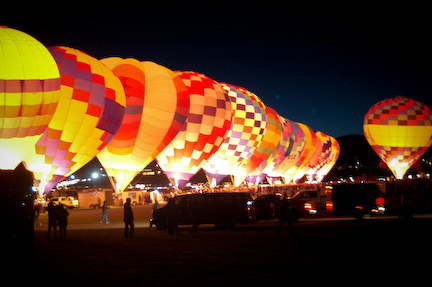 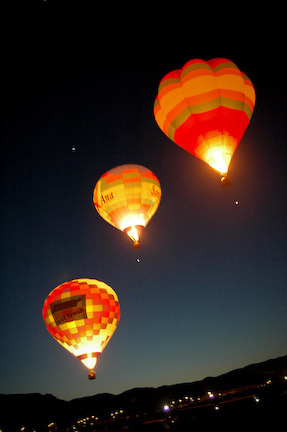 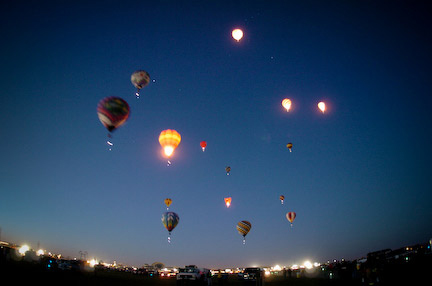 Then Mass Ascension starts following Dawn Patrol – this is where you see HUNDREDS of balloons all at once! It is like candy floating around in the sky! 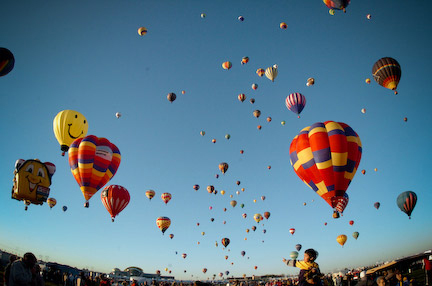 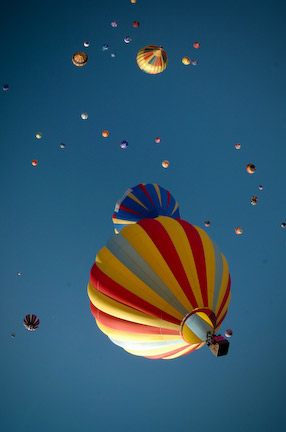 I love this one of the space shuttle balloon taking off: 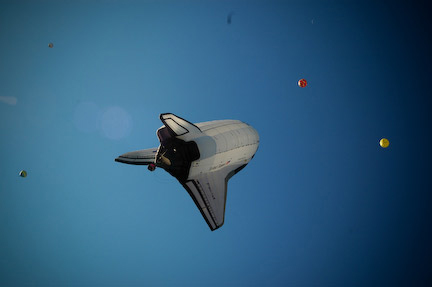 More balloon Glow from another night: 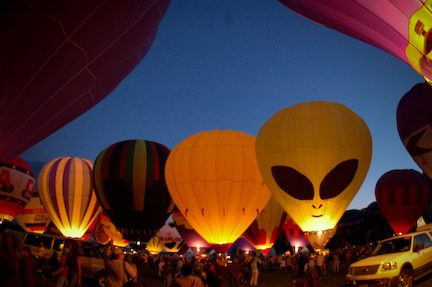 Another morning at Dawn Patrol I got this shot and it is one of my favorites from the whole trip. I love that it was SO dark outside and the sun was just starting to give some light on the moon and stars: 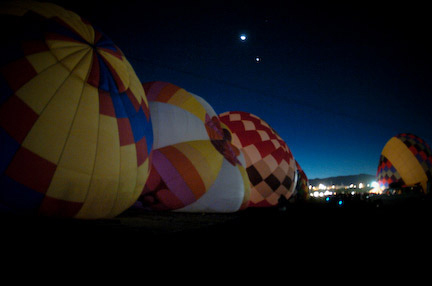 A note if you do ever attend the Albuquerque Balloon Fiesta, be sure to bring warm clothes! We figured it was the desert in New Mexico – how cold could it get? We even rented a convertible! Well, on the first morning we froze our rear ends off at Dawn Patrol! We quickly ran to Wal-Mart (side note – it is the nicest Wal-Mart I have ever been to in my life!) and got some warm jackets. Since it was such a nice Wal-Mart we actually got some really great cheap jackets and I even found a cute bag that would work perfectly for shooting weddings.

You can see how cold we are in this shot in front of Bob’s Balloon just before Mass Ascension: 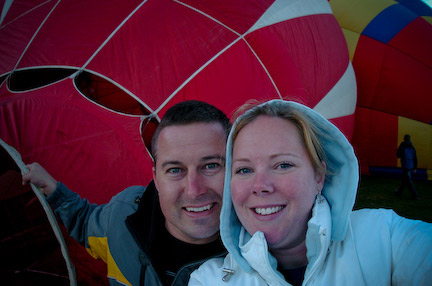 Bob kicking some heat into the balloon: 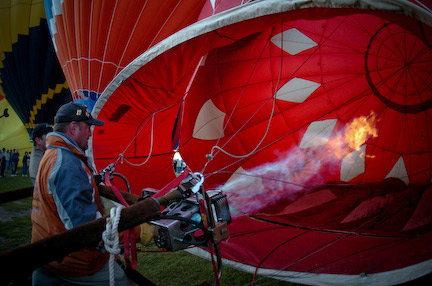 We were lucky enough to ride with Bob one morning. If you get a chance to go to Albuquerque for the Balloon Fiesta, there is a trick to riding in the balloons. If you pay, you ride in a 16 passenger balloon – it is still a nice ride, but not really the intimate traditional balloon ride if you want my opinion. It is REALLY expensive to ride in those 16 passenger baskets, too. If you can meet a pilot from your home town and help as crew for the week, you might get to ride for free. The other pilots are not allowed to sell rides – they can only give free rides to their crew and friends. We really didn’t think we would get to ride, but on our last morning Bob told us to jump in and we were ecstatic! 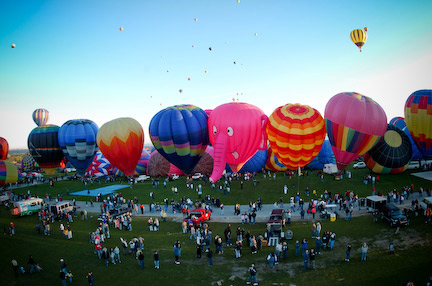 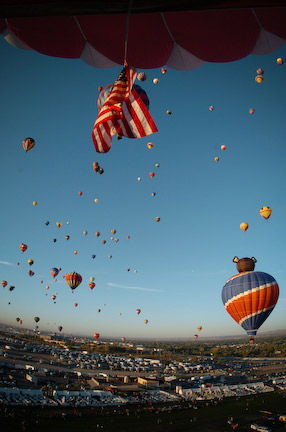 The field below with the other balloons joining Mass Ascension: 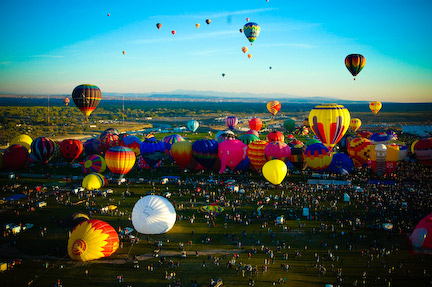 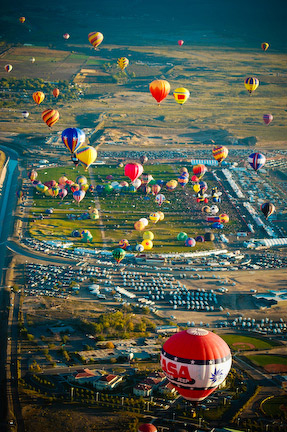 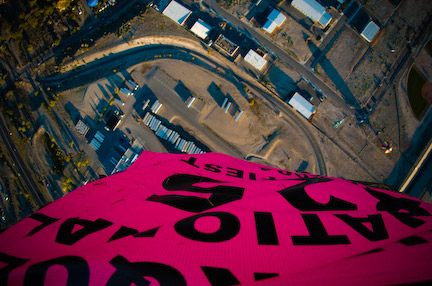 Next time you talk to Chris, ask him how easy it is to help a balloon land! We were very, very lucky that the idiots at our first choice were just waving and saying “hi” instead of answering us when we asked for help landing. We took off again at the last minute and landing in another field – where the Columbia Sports Crew helped us land! It was awesome!

You can check out this older post where Chris included our video from Albuquerque.