Since we were so close to Knoxville, we had to stop over and see Jason and Marcia and of course their two boys Ryan and Cooper. We even brought the dogs because it was their first trip out of the state of Florida so of course they had to meet all of the Blog readers we could meet up with.

We had a great time visiting and of course with kids and dogs there has to be at least one really funny story, lucky for us there were several. The only problem was that we didn’t get any of them on video, so I hope I can make you laugh as hard as we have been after our visit, or at least leave you singing.

So we were just finishing lunch when we found out that Ryan’s kids meal came with a dessert. A frozen orange-creamsicle-thing to be exact. But being 3 years old, it was much more fun to play with it than try to drink it. So after a while we all started trying to get him to try his desert. “Is it good?”, “What flavor is it?”, etc. and FINALLY he takes a sip. You can see the orange slush moving slowly up the straw. He gets a mouthful and stops immediately! His eyes went wide as he swallowed a mouth full of frozen orange slush and then he says, “That’s cold”. A three year old and a brain freeze, I wish we had the video camera on him for that one.

Then we get back to the house and let Duke and Goblin out while we are talking in the driveway. They were sniffing around like dogs do and out of nowhere we hear Goblin let out a half yelp-half bark as he came running toward us with his ears back and eyes wide! Something just spooked him and we had no idea what it was that could have scared an 80 pound dog like that. But then around the corner of the fence came running a white ball of fur that must have weighed 12 oz. This thing was no bigger than Duke and Goblin’s average squeaky toy and it was going about 40 miles per hour! Duke wanted to step on it, Goblin wanted to get away from it and the thing never slowed down as it did laps around all of us. Finally, it made a wrong turn and headed straight for Goblin. Goblin jumped to get out of the way (which never works when you are trying to dodge a dog) and ended up knocking the puppy over, then he landed on the puppy which freaked Goblin out even more! So now the puppy is yelping in pain, Goblin is running to hide behind Jason and Duke just thinks the whole thing is fantastic and none of the rest of us have even really understood what has just happened! 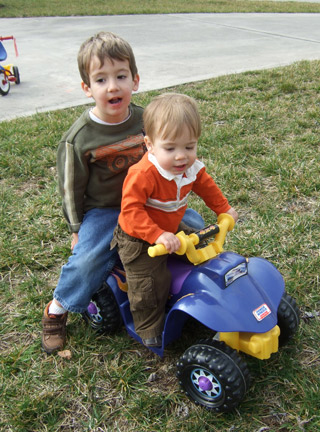 And throughout all of this great stuff the kids just keep doing their own thing, never mind all of the nonsense that the “grown-ups” are doing. Cooper is still playing in his little plastic car and Ryan is riding around on his motorized plastic four wheeler… singing, “I want to fly like an eagle, to the sea. Fly like an eagle…” yea. He sings the Steve Miller Band, while other three year olds are still stuck on all that kids stuff, Ryan has moved on to classic rock. I wonder what type of music Jason listens to? 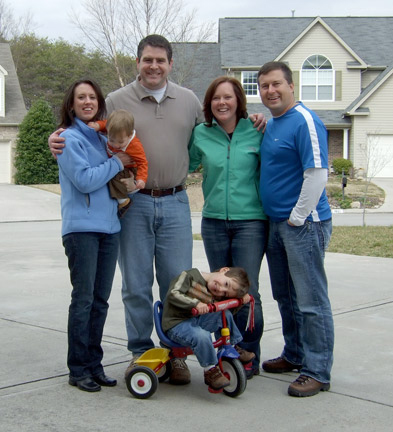 So Jason and Marcia, we definitely need to visit with you guys again. It was a great time, and I still can’t stop singing “Fly like an eagle…” we heard it twice on our drive home!