We are home! It was pretty sad walking in the door tonight and turning on the AC since our house was hot and stuffy. It is 70 now at 11pm but I bet it was 90 earlier today. Blah! So rewind….

For the past few weeks we’ve been talking about a little trip somewhere – maybe a cruise, skiing, beach – anything! Chris suggested the mountains on the east coast and I thought it sounded fun. I have never skied before, so I was up for small mountains to test it out before booking a big trip out west somewhere just to find out I wasn’t good or didn’t like it.

I looked on vrbo (we have used them before and they rock!) on Tuesday night for cabins near Gatlinburg (thanks to Jason Davis for the tip on trying this city). I found one cabin I REALLY liked and I decided to fill out the form saying we wanted it for Thursday through Monday. My decision would be based on if it was available or not. Right before bed, I checked my email and it was available! We “slept on it” and I really didn’t sleep because I was so excited. I’ve never planned a trip this quickly before! I emailed them back Wednesday morning and we started packing and finishing up work.

We decided to leave early Thursday morning at 4am so we could arrive by the 3pm check in. It was a 10.5 hour drive and we knew we would need break time with the dogs in tow. Well, at midnight I was still finishing up work. I knew we wouldn’t be in bed before 1am and as we were sitting eating a very late dinner, we decided to just get in the car and go without going to bed. We are night owls anyway and we figured it would be better to drive now while we were still wide awake then at 4am after only 2 hours of sleep. Chris ended up driving the whole way but I did stay awake nearly the whole time to help him stay awake, too.

We took 75 up through Atlanta and made it up to the Great Smoky Mountains National Park around noon and made a bunch of stops throughout the park. One stop was a bit of a hike on the Appalachian Trail – Check that one of my list of things to do in my life! Then we headed into town and checked in early into our cabin. Our cabin is in a quiet area just north of Gatlinburg – it was so quiet and we are the 2nd and last cabin on our road so it was very private. There was tons of land for the dogs to run, too. We had a fireplace, a pool table and a big jacuzzi tub! There was also a hot tub on the back balcony.

Here are some pics: 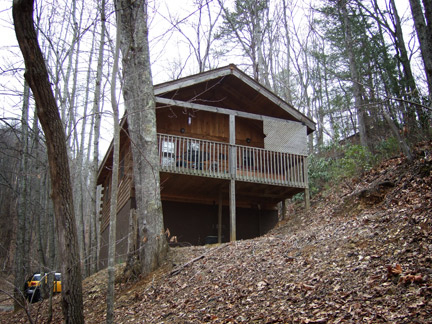 We kept sleeping late because the bed was so comfortable! 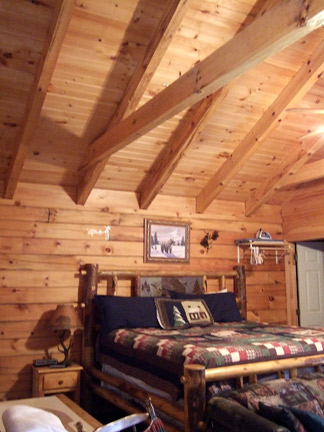 The hot tub we used every night – even though the run to and from the door was hard in the cold! 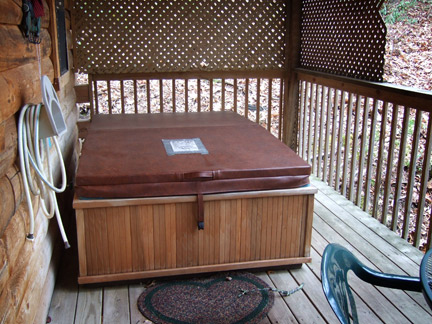 We used the fireplace every night – it was awesome to fall asleep to it flickering: 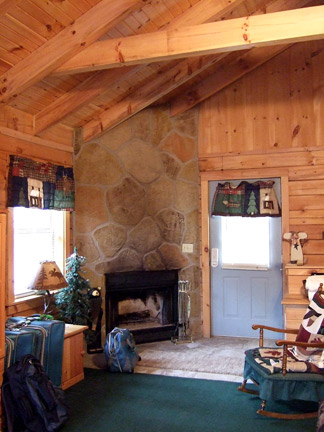 To you long-time blog readers, you will remember our theme song is “Permanent Vacation” by Aerosmith. It was fitting that the classic rock station in Knoxville that we listened to was having an Aerosmith weekend while we were there!

And a note to Jason Davis – both Chris and I have “Fly Like an Eagle” stuck in our heads thanks to Ryan. It also came on the radio as we drove away from seeing you! I’m sure we will post about that later!