We worked early and quickly the other morning with a plan – to take the afternoon off and go to Animal Kingdom!

I wanted to note some tips if you are considering a trip to Disney – and I am sure I will add to these throughout the year.

One nice thing Disney does now – planned times to meet the characters. I remember years ago when you were lucky if you found them. Today, they had set times almost all day at one location to meet Tigger, Pooh, Piglet and Eeyore.

Here we are with Tigger: 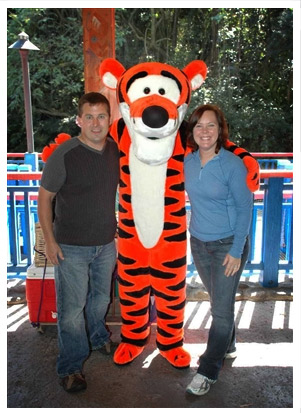 We have only been to Animal Kingdom once and we were only there for two hours before the park closed at 6pm. That day we did the Kilimanjaro Safari and the Pangani Forest Exploration trail. The safari was very cool – we saw lots of animals. I would have liked to see more of the giraffes – they were hiding. And the hippos were neat! Then walking around – the key is patience. You just have to wait and watch. There is an area where you can see underwater in the hippo pool – and if you wait long enough, one will swim by! It is awesome!

We went back to Animal Kingdom again with the plan of hitting everything – except the two we already did. If you really want to see the Disney parks – you can’t do it in just one day. This is the “value season” as Disney calls it – where the lines and crowds are smaller. But don’t be fooled – just the Magic Kingdom alone gets nearly 17 million visits a year! So there really isn’t a slow season – not like Universal at least.

Here are my “must-see” places in Animal Kingdom:

1. Dinosaur – this ride is awesome! It is similar to Spiderman where you are on a track in a simulator. But it was so realistic and I didn’t want the ride to end. The asteroid effects were awesome and the animatronics were incredible.

2. The Bengal Tigers – one of my favorite animals. We went and started watching them – they were all just hanging out and people were not staying long to watch them at all. Tip – stay for a while! We stayed for about 20 minutes and we saw so many things – one tiger nipped at another playfully, then they ran across the fountain. I look forward to going back and just watching them. Too bad they don’t have benches for this!

3. Primeval Whirl – this is a teacup ride on roller coaster rails! It had me laughing the entire time!

4. Wildlife express trail to Conservation Station – you can watch vets work on animals, see what snakes eat (golf balls and coins are not good!) and see tons of animals – spiders, snakes, ants, etc. There is also a petting zoo area and again – if you hang around long enough, the animals get active – especially when the cast members arrive with food!

5. Expedition Everest – tip: don’t watch or read about the ride on tv or online. It spoils the fun! We just watched a tv show on Animal Kingdom so we knew all the secrets. Just go ride and enjoy it! I was screaming and laughing the whole time – a great coaster overall.

So we were there an entire day and we still didn’t see everything – and again it is value season! We need to go back for the shows – Tough to be a Bug, Festival of the Lion King, and Finding Nemo the Musical.

If I had to estimate – you need two full days at Animal Kingdom to enjoy all it has to offer.

Oh – and we ate at the buffet in Africa called Tusker House. It was $20 a person for lunch – a bit steep. But if you ate at any other sit down place you would pay that for a meal. And at Tusker house there was a wide variety of really good food – I had many favorites! Buffets are always great so you can try a little bit of everything. And we did!

Stay tuned for other park reviews and tips throughout the year!