Yeah, we are still doing Vegas reviews. The sad thing is today I was telling Chris he still hasn’t made a cruise video from our January cruise! Someday…

Late one night we were saying good night to our friends at the Tequila bar and Michele who was leaving Las Vegas the next day said that she wanted to go to the Playboy club at the Palms hotel. Well of course we had to go, so we jumped into a cab with Jeffery and Michele and we had a great time.

Michelle said that she wanted to “tweek” one of the bunny’s tails but she was too shy to actually go do it so this is our version of Michelle “tweeking” a Playboy Bunny’s tail. 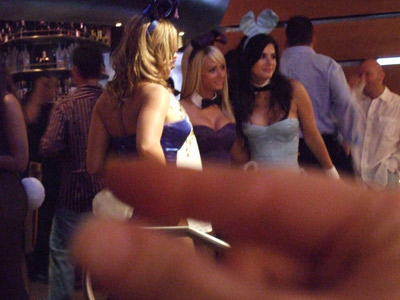 One thing about Las Vegas is that they stop at nothing to make their decor unique and eye catching. This is the view of the area behind the bar where they keep all of their liquor and as you can see shelves are just not enough. 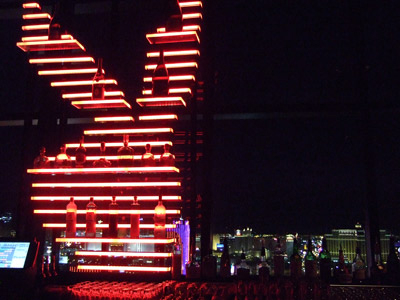 So here’s proof that we were all at the Playboy Club at the Palms! 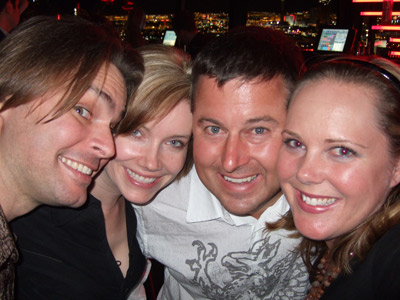 And here’s the view of the strip from the Club which is at the top of the new tower at the Palms, over 50 stories up above Las Vegas.

Of course the trip wouldn’t be complete without a self portrait: 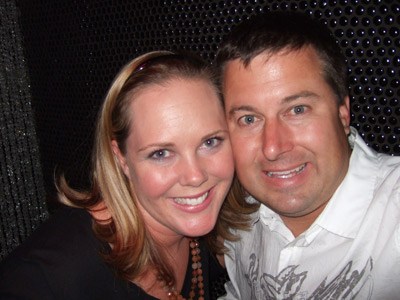 I can’t say that we will go back – the $40 a person cover charge was a bit steep. But I like that now we can say we went. And everyone has been talking about “The Girls Next Door” it is a reality show with Hugh Hefner and his three girlfriends. We had not heard of it – so we DVR’d the show and we have been catching up. Now that we have seen the show, we are glad we went to the club.

The hardest thing for me was watching people play Blackjack at the tables with $100 minimums. They would plunk down a roll of cash and the dealer (a hottie Playboy bunny) would count it out so fast – $1200. Three bets later, the guy would get up and leave. $1200! Gone in a few minutes! Do you know what I could buy with $1200? Several pairs of very expensive shoes! I just don’t know how these people can throw down that much money. It was interesting to watch, that’s for sure!