In December 2004, we bought a new washer and dryer from Sears. They are the front loaders – and they had great reviews. In January 2006, just barely a year old, the washer started having these F11 errors. We would cancel the load and restart and it would be okay. Finally, it got so bad that cancelling didn’t solve the problem. We would end up doing a rinse and spin load just to get the soap out and then dry them. We called Sears to come take a look. $150 later, they said it was the board and it was $600 to replace it. We said we would hold off and hope for the best. Well, then the FDL errors started. Those are the door lock errors. The door locks and holds your clothes hostage until it decides to unlock. It usually did after a few trys. But Chris did his last load – socks and underwear. And he added bleach. The load started and not even a few minutes in, the door lock error came on and that was it. It never unlocked again.

We went and bought a new Maytag – let’s hope this one lasts a big longer.

Here is the sad washer with the dryer – by the way the dryer works fine! 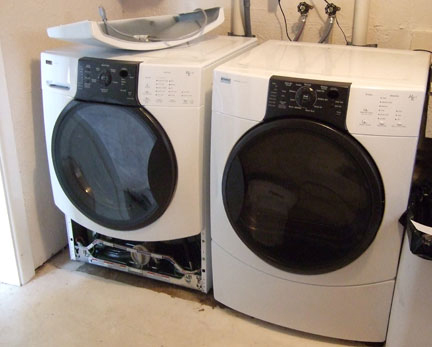