I’m sure you’ve heard of Oprah’s new Leadership Acadamy in South Africa. She is getting slammed by so many people about how she should focus on children in America. 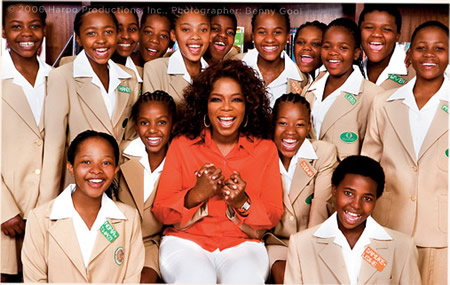 Here is some information about the acadamy:

More than 3,500 girls applied for 152 spot that’s a 4 percent acceptance rate. (Harvard accepts about 9 percent.) Oprah interviewed all of the 500 finalists herself, though the students weren’t told they’d be meeting her. Most were understandably stunned when they walked into the interview room. One girl opened the door, took one look at her and declared: “You’re so skinny in person!” Oprah asked the various South African tribes and communities to nominate girls with exceptional leadership potential; her plan is to educate the best and brightest and hope that, after being Oprah-cized, they will lead their country out of poverty. To weed through the finalists, she asked each applicant a series of questions about her background and dreams. Some had questions for her, too. Lesego Tlhabanyane blurted out: “Do you spend $500 to get your eyebrows done?” Oprah laughed, and admitted her to the school. A girl with moxie is exactly what she’s looking for.

Oprah also knows that some people will complain that charity should begin at home, even though she has provided millions of dollars to educate poor children in the United States, especially via her Oprah Winfrey Scholars Program. But she sees the two situations as entirely different. “Say what you will about the American educational system, it does work”? she says. “If you are a child in the United States, you can get an education.” And she doesn’t think that American students who, unlike Africans, go to school free of charge, appreciate what they have. “I became so frustrated with visiting inner-city schools that I just stopped going. The sense that you need to learn just isn’t there,” she says. “If you ask the kids what they want or need, they will say an iPod or some sneakers. In South Africa, they don’t ask for money or toys. They ask for uniforms so they can go to school.”

But NY Post writer Linda Stasi had some nasty things to say to Oprah. Which is funny since it is Oprah’s money and she can do what SHE wants with it.

Some of Linda’s column:

OPRAH Winfrey needs an education and needs one badly.

So, please, let me be the first to offer her a big course in basic common sense.

Right off: How in hell do you think it’s OK to spend $40 million to build a school in another country when one third of the kids in your country will likely drop out of school this year?

And on what planet is it a good idea to build a school 9,000 miles from your own hometown – before you build one in Chicago where nearly 50 percent of public school kids don’t graduate? Do I have to spell it out in one of the 11 official South African languages for you to get it?

I mean, seriously, does it make sense to go to South Africa with 200 of your celebrity pals who wore cleavage-baring outfits to publicize the opening of a school for disadvantaged girls when something like 86 percent of the kids in public schools in your hometown are poor?

My thoughts on this – the children in Chicago dropped out because they don’t care. Even if they had a fancy school with good teachers and a UF sized library, the kids would still drop out. I think that even if they did get a new school (Carver I think is the one Stasi complained about) the kids would trash it. Those kinds of kids just get angry that someone has more money than them and they don’t appreciate that something was done for them. I did a teach in a few years ago for one of my brides. I talked to 4th and 5th graders about being a photographer. I thought it was fun, but the kids really didn’t care about my job. The main questions I got asked in all of the classes: “how much does your house cost?”, “how much does your camera cost?”, “how much money do you make?” and “what kind of car do you drive?” I know being a kid I thought of these things, too, but it was almost too much.