I sometimes wonder if I could have made it as a photojournalist. When I say that I am not talking about “wedding photojournalism” I am talking about hard news. I did a few news stories in Gainesville and I always got all worked up over any kind of tragedy. Over the years, I’ve noticed I am softer than ever – I cry at anything. Our December 17th bride lost her dad a few months before her wedding and when she had a moment with her grandmother (her dad’s mother) they started to cry and I lost it. I cried more than they did!

Even though I no longer do any kind of news photography, I still am a member of NPPA and I look forward to my News Photographer magazine. It always has photos that move me, inspire me, and remind me that life is a gift to be treasured.

Recently, I saw some of the work of Pulitzer Prize winner Todd Heisler. The two pictures I am going to post are so moving. I can’t even begin to describe my feelings when I saw these two pictures and read about them. The first one I just kept starting at – I couldn’t turn the page. 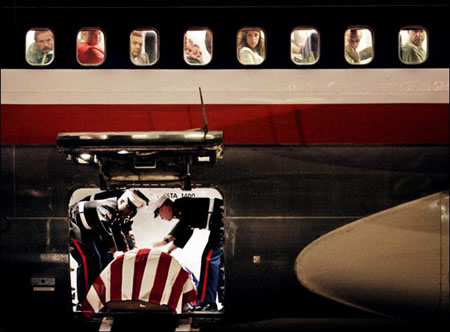 When 2nd Lt. James Cathey’s body arrived at the Reno Airport, Marines climbed into the cargo hold of the plane and draped the flag over his casket as passengers watched the family gather on the tarmac. During the arrival of another Marine’s casket last year at Denver International Airport, Major Steve Beck descibed the scene as one of the most powerful in the process: “See the people in the windows? They’ll sit right there in the plane, watching those Marines. You gotta wonder what’s going through their minds, knowing that they’re on a plane that brought him home,” he said. “They’re going to remember being on that plane for the rest of their lives. They’re going to remember bringing that Marine home. And they should.” 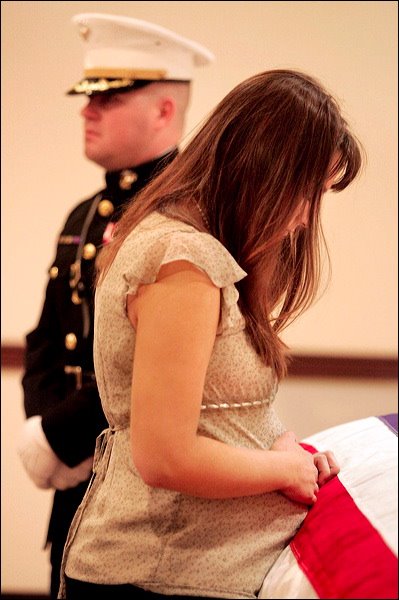 Katherine Cathey pressed her pregnant belly to her husband’s casket, moaning softly. The baby, due Jan. 1, will be named James Jeffrey Cathey Jr.