Did you watch the Fiesta Bowl last night? What a great game! I am not sure why, but I don’t really care for Oklahoma. Everyone seems to love Stoops, especially since he was at Florida. But I don’t really like Oklahoma. And after hearing our friend Donny say that Boise State is this nobody team that plays a nobody schedule and they shouldn’t be playing this bowl game, I had to cheer for them. Gotta love the underdog!
You can watch the 2 minutes of overtime here:

So the craziest thing happened after the game. The dip newsguy was interviewing Ian Johnson. Ian’s girlfriend, Chrissy Popadics, the head cheerleader of Boise State, was right next to Ian and they were arm in arm. After asking his questions, he said “Let me let you propose to your girlfriend” and she got this look of shock on her face. He blew it! The stupid newscaster blew it! I couldn’t believe it. So of course Ian got down on one knee and proposed. But what was this newsguy thinking? What an idiot to ruin the moment for them like that! 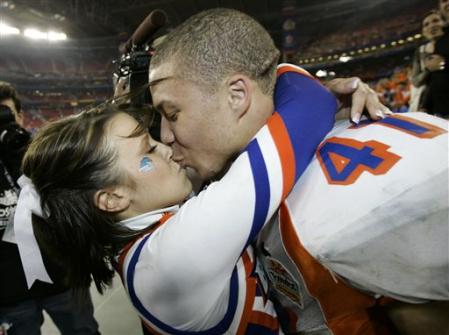 If you know Ian or Chrissy, let them know I would LOVE to shoot their wedding! Send them to //www.SJFoto.com!

*update* Here’s the video of the dip news guy: