Have you seen this show? We do a lot of dog photography, and everyone keeps mentioning it. So we set the DVR to record it. It is a pretty good show! The stuff is pretty “duh” type problems, but it is great to see this guy whip dogs into shape.

One dog was given gourmet meals and he refused to eat them. The kids in the house complained that mom cooked for the dog and not them! The Dog Whisperer said that he needed to “work for his dinner” and he then would eat it. So the guy took the dog rollerblading and wore him out. Sure enough, the dog ate!

So we joked that we were going to make Duke (who is OBSESSED with food) work for his dinner. We usually walk them, but I decided to be brave and try Rollerblading with them. Duke LOVES it! He loves to run – so much that I can either A) be lazy and let him pull me like a sled dog and I go flying down this quiet road by our house or B) Skate super fast and he runs really hard while trying to jump and grab the leash (I don’t even have to hook him up – he is holding on to the leash with his mouth the whole time anyway!)

Well, my 1990ish skates from Sam’s fell apart, so I tried using Chris’ pair and he ran with Goblin (who is a trotter by the way – we can’t get him to run!). But his skates were way too big. So I decided to get a new fancy pair – they are sweet! They go so much faster than my old cheap ones. I even noticed that Chris’ pair was faster than my old ones. These new ones are great, though. 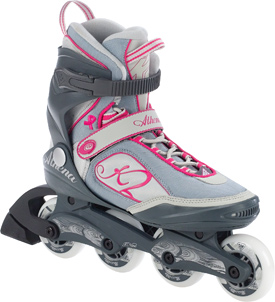 I had my first accident the other night – the problem is we usually go about midnight since I have been working so late recently. It is good way to get my blood going to let me stay awake for another hour or two. Well our neighbor put out a hose across the sidewalk. I didn’t see it (I have the bad sidewalk cracks memorized) and I couldn’t recover the fall. All I kept thinking was “don’t land on the arms or hands!” (I had 2 weddings this weekend). So I dove and landed on my shoulder and hip. OUCH! I am still bruised and it is days later. But I am slowly getting better on my balance and catching my falls. Who knows – I could do the inline marathon in March!