So here we are getting ready for bed – again. I was already in bed but my mom called to tell me my cousin just died of a heart attack. I had never met him (he is in Scotland) but it was still a pretty sad night. I was puttering around trying to not think about it and I heard a very loud CRASH that sounded like a car hitting something. My first thoughts were that someone hit a house. I always have dreams that someone is going to hit our house (our bedroom is in the front-most part of the house) and people are known to speed on our street.

So I yelled for Chris to call 911 and I ran to the door. Sure enough – an accident right out front. A white Impala had hit a Montero. The girl in the car was upset – of course. But she finally got out of the car and the first thing she wanted was a cigarette! The neighbor asked her if she was in pain and if she was wearing her seatbelt. She said she was not wearing it. Stupid! I then figured out that the Montero she hit was parked on our road. He said the car had moved about 10 feet – so she must have hit it HARD! Hard enough to smash her winsheild and to break her axle. The girl also said “How am I going to pay for this? This is my 6th accident in 2 years!” yikes!

So I then look over and see a red Mustang in front of our yard. I said “who is this?” and no one knew, so I started to walk over to the car. The girl shut off her light inside and started the car. I yelled “do you know this girl?” (they couldn’t find her ID) and she didn’t answer. She then went to turn around and rolled down her window. I asked her if she saw the accident and she said “uh….no.” Like she had to think about it. Then she said “but I almost hit her” I saw her turn around – and she almost hit another car doing it – he kept honking but she didn’t seem to notice. I then realized that we saw that Mustang pull in across the street to turn around – so she had been following the Impala. I think they were together and both had been drinking. Mustang Girl wasn’t about to get caught drunk driving, too. Then she leaves and a guy pulls up and runs over to the Impala girl – he asks if she is okay and then he takes off. I think he was with her, too. Again – not wanting to get caught if they were all out partying together. (as I type I can hear the picking up all the trash! what a mess….)

So Impala chick’s dad pulled up and he didn’t even seem upset. He yelled at me for taking photos (I kindly ignored him – hahaha!) I guess when daughter dearly gets in accidents all the time it isn’t a big deal. The Impala did look brand new. Note to self – don’t keep buying my kids new cars every time they wreck them! So the Impala girl got taken away in the ambulance. I sure hope she had insurance – because she didn’t look hurt at all and that is going to be an expensive trip to the hospital.

So the bright side is we finally met our one neighbor. We have been in our house 5 years today and it was nice to meet her! I gave them a CD of all the pictures for their insurance.

Here are some snaps I took: 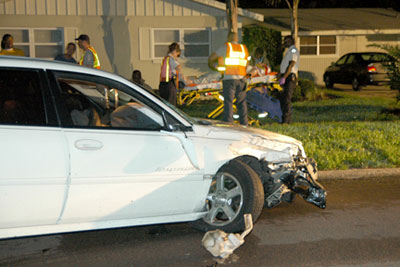 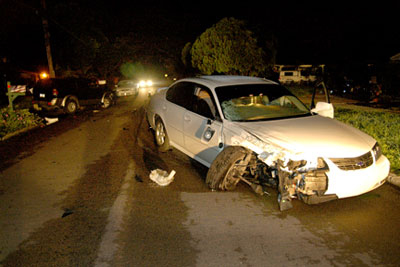 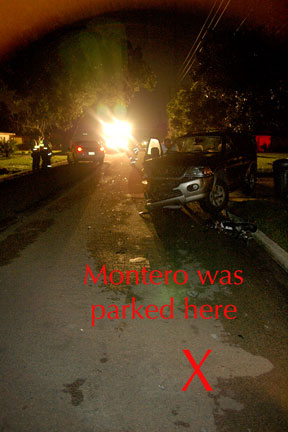 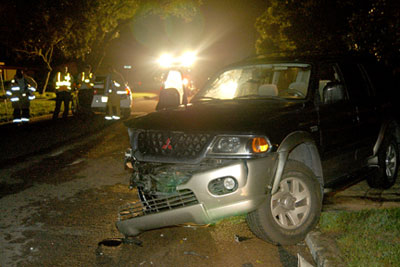 Whew, what a night! And I was thinking “who is out on a Sunday night anyway?” but I forgot tomorrow is a holiday. Yikes!