Last Spring, GW Hospital asked if they could feature James in their magazine. (Before leaving DC, James and I volunteered at GW Hospital once a week.)

Sometimes I dress James up for the season: he has a pumpkin costume for Halloween, a St. Patrick’s Day hat, a cowboy hat and a Santa’s Little Helper sweatshirt. I paint J’s nails with glitter and, in addition to the therapy dog bandana, James usually wears a banana that I made for him.

We really look forward to our visits! It takes about 20 minutes for us to walk down to The George Washington University down in Foggy Bottom. We are lucky that we didn’t really get any super cold or super hot days where we had to drive to the hospital. James would stop in and visit a few of the social workers and nurses first so they knew we had arrived. Then we would head in to see the patients. James finished the rounds by stopping in the nurses’ station in the middle where he always got a lot of love! One day, James noticed a bag under a desk and he REALLY wanted what was in the bag. I couldn’t figure out what he was doing! Then one of the nurses said there was a stuffed animal toy in there! They said James could have it and he was SO excited! Every time we finished our visit, James would head over to where his squirrel toy was and play with it for a few minutes! 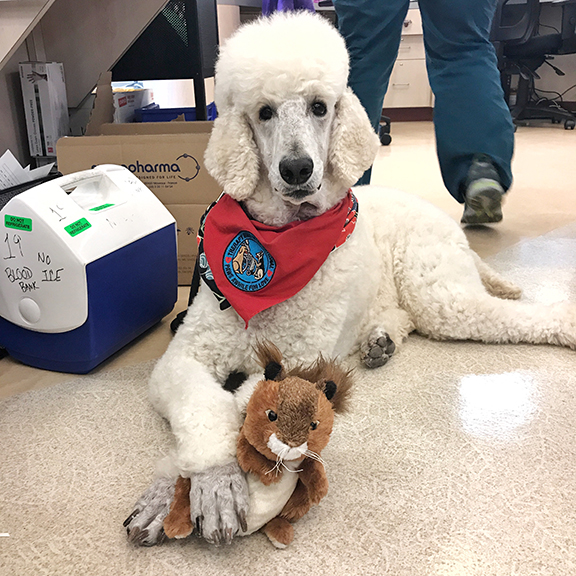 Then after we left the nurses’ station and infusion suite, James would really get excited. Why? Because his last stop involved stopping in an office that always had treats and water!!

The magazine issue featuring James came out a few months ago, but I was waiting for approval to post about it on our blog. We were given approval and here is the entire article about James: