We rarely have fresh flowers around the house. I really like them, but they don’t last and I usually don’t think about them once I pass them at Fresh Market. So we were confused when flowers showed up at our door. They must be at the wrong house, we thought. But nope, they were for us!

Our friend and fellow photographer John Payton sent them. He is an awesome photographer and you should check out his site. He had a heart attack and his wife called me one morning worried about getting his Saturday wedding covered. I started calling everyone I knew and I found three photographers in the area that were available and willing to help. One of them was Kevin Keelan, another awesome photographer. John knew Kevin from when he lived in Orlando so that worked out that John knew who was covering for him. It is great to have a network of photographers so we can help each other out in a pinch.

Here are the pretty flowers John and Margie sent: 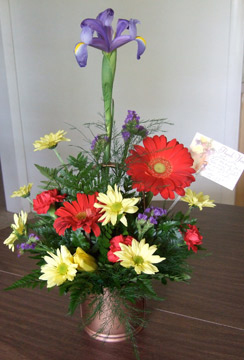