We booked a cruise on Celebrity’s newly refurbished Century back in November. We had a Sunset Verandah and we were so excited to get this rare room! We have been counting the days until we leave. Could January 13th get here any faster?

Fast forward to December 31st. We had an E shoot in the AM for our January 27th bride and a party that night. The year was coming to an end and I was looking foreward to 2007. And of course our cruise! We do the E shoot and my bride kept saying “2 weeks! I am freaking out!” and finally I said, “So are you heading to South Fla in 2 weeks?” and she looked at me funny. Guess what? Her date was moved from January 27th to January 13th and she forgot to tell me! I should have known – she was March 31 originally and I found out from another vendor that the date had been changed.

So what to do? We waited for 2 whole days. Celebrity was closed on Dec 31 and Jan 1. We didn’t get insurance – but was it too late? Well, I researched the insurance and it turns out that even if we did have it, our excuse wasn’t one of the reasons you could use to cancel.

I called Celebrity first thing on Tuesday January 2nd. Bad news, we lose half our money. Not good. Not good at all. But I just felt like we couldn’t NOT shoot this wedding. So we cancelled. The somewhat good news is if we would have called on the 3rd we would have lost 100% since that was 10 days out.

Here is the ship we should be on right now. We would probably be at a show right now. Our having drinks at one of the bars. Or sitting on our balcony. Can you tell I am sad??? 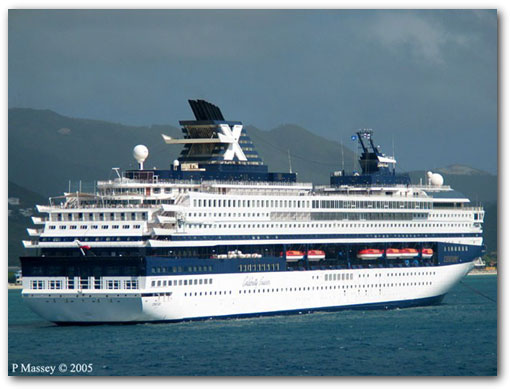 This was before the refurbishment – the ship added a lot of balconies. We will get on it someday…..