Well, a few days early. I finally got a car! I can’t even type about how excited I am! This car rocks! I got a sapphire blue Infiniti FX. It has so many cool features – even a back up camera!

It is funny how this car search went full circle. I actually looked at the FX in January 2006. I did a test drive and I loved the car. But I kept dragging my feet on buying. So I kept looking but I really loved the FX. Then at some point, I decided I am about to turn 30 and I don’t have kids so I need a sports car!

So I went to look at the Infiniti G35. I decided on the Sapphire Blue, but they couldn’t find one anywhere. ANYWHERE! So I decided to settle on black. But they started to annoy me when they still couldn’t find the exact one I wanted (I wanted Nav, the aero package since I loved the spoiler and a few other things). So I gave up. I was pretty bummed for a few weeks, especially since I saw black ones with spoilers everywhere!

Then I went to look at a CLK and decided it wasn’t my style. I still love the car, but I feel like I need to get a manicure once a week just to look like I should drive it – hahaha!

Then we talked more about the dogs, and fitting them into a small sports car. And how we just went on a cruise and our 2 suitcases wouldn’t have both fit in the G35. So we decided the FX was a good choice.

It’s funny – we were going through all of the fun stuff on the car today, and I didn’t even know the one I chose had half of this stuff! It’s been a year since we looked – we didn’t even look again – we just called and said what we wanted.

There were 3 sapphire blue, sport (dark taillights and headlights, metal petals), techno (navigation, hands free bluetooth), touring (sunroof) models in FL. Turns out one was a demo, so that was out. One had a $1000 hold on it. The 3rd was at a dealer that does NOT trade. So we were starting to pick our 2nd choice color – ugh! But our sales guy had their driver stop by the dealership, and they let us have it! It was trucked up late last night and it was completely new – wrapped in plastic head to toe. Our guy drove it to get gas, and that was it – a total of 8 miles on the car when we got it! Isn’t that great!?!?! Apparently, the gas trip was 5 miles. And the 3 other miles are the test track in Japan.

So I now have my car and I smiled the whole way home. This car rocks! I was actually nervous – my hands were sweaty! I am sure that will pass in the next few weeks – I just didn’t like people getting near me at all! We even stopped for lunch by our fave bridal salon and parked next to a Corvette and a Lexus. I was watching out the window – a bride had the Corvette – and was trying to fit her big dress into the trunk – yikes!

I will post lots of detail shots later. I am still behind and haven’t even posted a cruise shot yet! 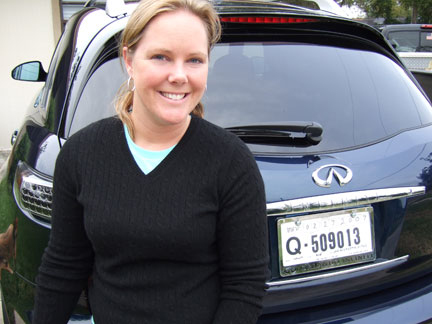