I feel like I am always on the quest for long lasting mascara. The problem isn’t finding it (see this post from 2010) – the problem is finding one that doesn’t become discontinued! First it was Revlon’s ColorStaylash tint that was discontinued. Now, my current favorite is also being discontinued: 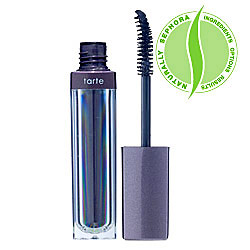 The Tarte mascara was originally in Sephora’s 2009 LashStash and I fell in love with it. It doesn’t budge all day – not even with heat, oily skin, sweat and tears!

So I asked my friend aka Orlando’s makeup artist expert Michele Mann at M3 Makeup what she recommended for waterproof mascara. She told me about Cover Girl’s Lash Blast mascara. When I went to look at the CoverGirl selection at Ulta I was a bit overwhelmed. They have a TON of mascara. And even when I narrowed it down to the waterproof ones they still had so many to choose from. But then I saw it – the 24Hour version of LashBlast and I knew that was what I wanted to try.

The best part? It comes in a range of colors! Usually waterproof mascara only comes in black but check out these colors:

The wand is awesome – it is a rubbery wand with lots of bristles. It applies thin to start and then you can thicken it up with a second coat. And it really does last 24 hours! I have worn it to several hot weddings where I was very oily and sweaty and it didn’t budge at all.

It is funny – the reviews on the CoverGirl website for this LashBlast 24HR are pretty bad – they are all complaining that it doesn’t come off. But isn’t that the point? You don’t want it to come off! I do use an oil based remover at night to take it off and it is no problem. If I use my basic cleanser it doesn’t come off.

Hopefully I can continue to use this mascara for years to come!