We went to a party and I decided to wear a skirt and my knee high black boots. It was a little chilly outside but I figured it would be okay since the boots would keep my legs warm. I looked great and headed out the door. We arrived at the party and as we started to walk inside the host said “you need to take your shoes off.” I was shocked! I’ve been to homes just hanging out where you take your shoes off – but you are wearing jeans and tennis shoes. But a party? I then remembered the Sex and the City episode where Carrie had to take off her Manolos at a party and of course they were missing by the end of the party. I was relieved for a moment that I didn’t wear a pair of my Manolos but then I realized my knee high boots weren’t exactly cheap either.

My issue is I wish they would have told us in advance – I would have worn long pants. It was freezing inside their apartment and my legs were constantly covered in chill bumps. Then I was wearing a skirt, so it was hard to cuddle up on the couch like everyone else was doing. I was so cold we ended up leaving early – and we hadn’t had dinner yet and no one was really eating.

I guess I just figured if you are having a party you suck it up and clean after. Or you tell them about your no shoe policy in advance and offer a basket of Martha Stewart booties to wear inside.

If you haven’t seen the Sex and the City episode – it is from Season 6 and it is called A Woman’s Right to Shoes. Carrie ends up borrowing the hosts old Tretorns and returns them a few days later asking if her Manolos have shown up. Of course they haven’t and her friend offers to pay for them. When she finds out they were $485 she complains to Carrie that it isn’t her responsibility to pay for her lavish single lifestyle. Carrie goes home and does the math for her friend’s wedding, showers, babies, etc and she has spent over $2000 on her friend yet Carrie isn’t married and doesn’t have kids. So she leaves her friend a message saying she is marrying herself and she is registered at Manolo Blahnik. Her friend gives in and buys her back the stolen shoes. 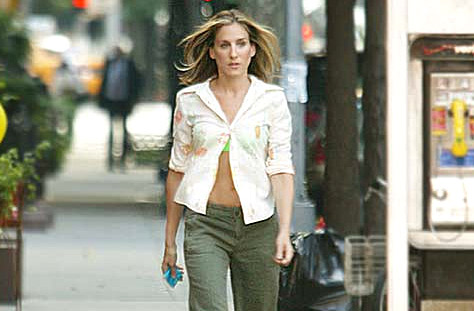