Not long ago, we wrote about our adventures in Austrian dog food. Well, today we are going to talk about Austrian dog treats! There are no mass produced flour-full dog treats in Austria. All of the treats are… natural… but just not what we are used to seeing!

We stopped at DogDropShop on Gersthofer StraÃŸe while James was being groomed with Margit at the Hundesalon. I was looking around and I spotted the treats – they were all dried animal parts from a company called Mascota Vital. What were these animal parts?!?! I looked closer and spotted one – rabbit ears. And not just the ear, but the whole side of the rabbit’s face from nostril to ear. And there was fur. And whiskers. Oh. My. Goodness. Chris was grossed out and didn’t want to get them. But I love odd food and odd adventures so for only â‚¬6,10 for a bunch of rabbit ears, I wanted to try them! 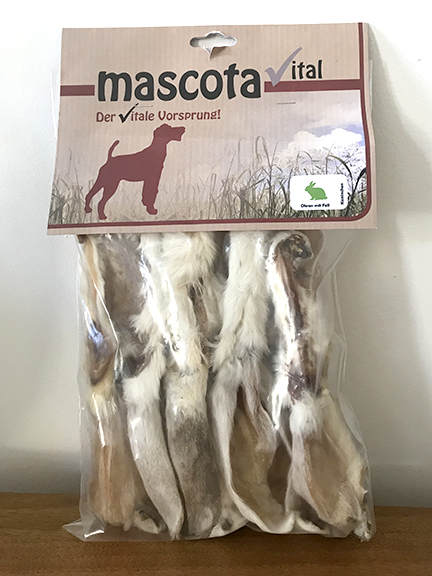 They were in a paper shopping bag when we arrived to pick up James. The excitement of us coming to pick him up from the groomer didn’t last long – he wanted to smell the bag. The entire tram ride home, James kept shoving his muzzle covered nose into the bag!

Once we got home, I showed James the treat and took this photo: 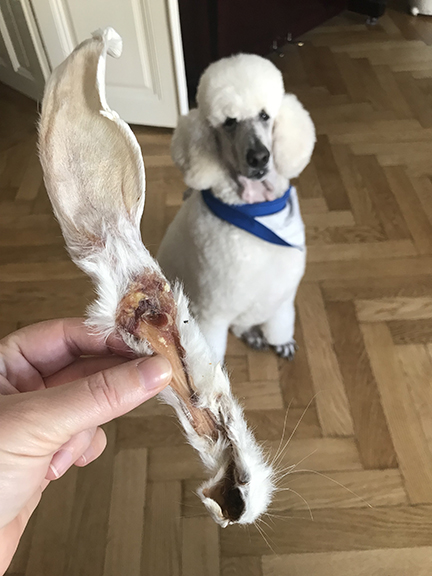 James went nuts! He was so excited about the rabbit ear: 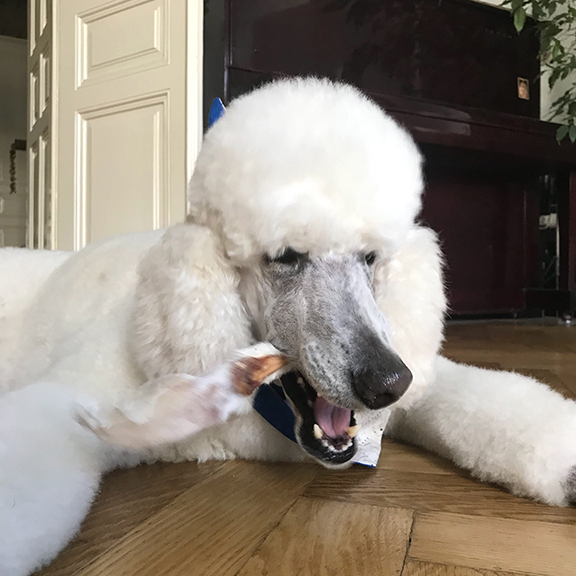 Here is the thing – James is a really good dog. He doesn’t jump up on people or tables. Not even for food. He sits. Yes, he begs. But he never jumps up. I put these ears in their bag on the dining room table. James just kept sitting and staring at them. FOR A LONG TIME. I was getting a little worried – this was not his usual behavior! He LOVES these rabbit ears! I was actually worried that he might jump up on the table and eat all of the ears when we weren’t home. So I put them on top of the fridge. Well, now James just sits and stares at the fridge: 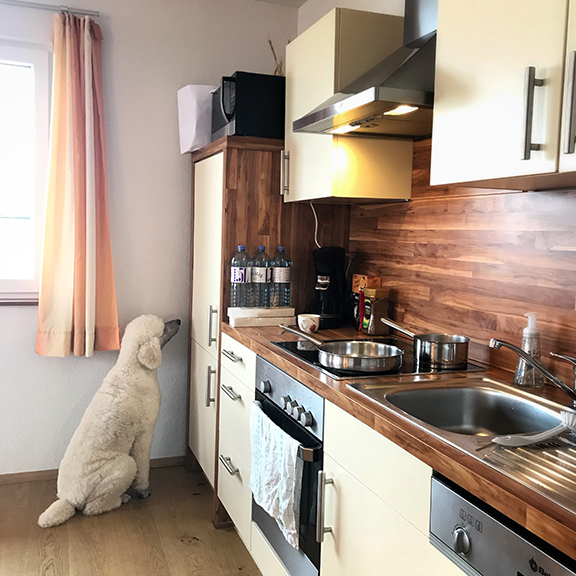 The funny thing is – after a while his head gets tired from looking up. So his head drops and he looks at the floor. It is so sad. He looks like he is in trouble or something. We were leaving to go on a walk when James didn’t even want to go on a walk. He just sat at the base of the refrigerator and stared at the floor. Chris finally said something really funny, “James, you aren’t in time out anymore!” I was laughing so hard! It really did look like James was in time out sitting in the corner looking at the floor!