If you have never tried Raw food you have to start at Juliano’s Raw in Santa Monica. We had heard about Juliano’s but once we started looking at the menu we knew we were in for something special. Starting with the Chocolate Shake 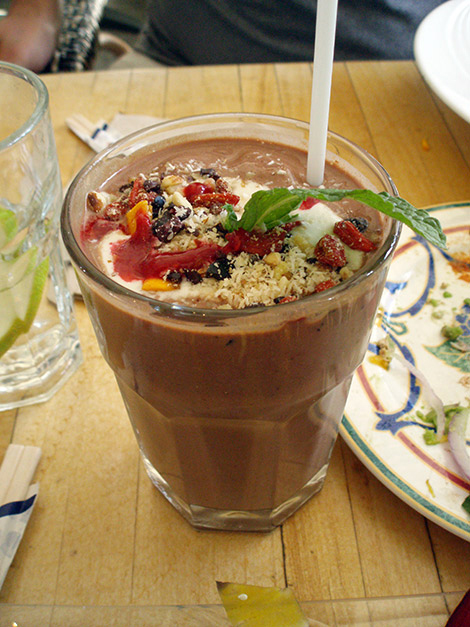 but of course this is not your typical Shake because there is no dairy in it at all, this shake is made with a nut milk (or mylk, as they spell it) and it is by far the best Chocolate Shake we have ever tried. Not only that but it is healthy because it is made entirely from nuts and carob. If you don’t believe me, check out their menu.

Check this out, a Raw version of Raw fish… the No Salmon Roll which is made with a Pumpkin PÃ¢tÃ© and Guacamole. Does it taste like actual sushi? Actually, yes! 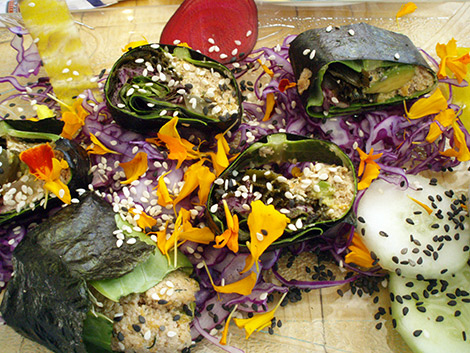 Since it’s been so long we can’t remember the exact name of this dish but it was topped with pomegranate seeds and has strings of squash as decorations along the sides of the plate. 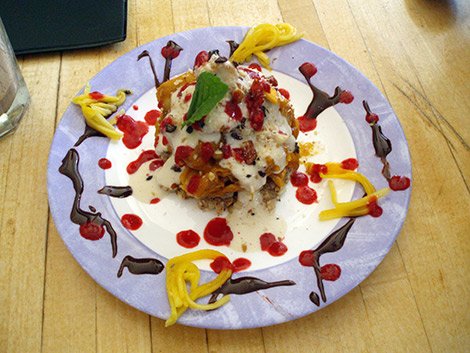 Then we tried the Green Curry Pasta, which is not pasta as you might think. The angle hair like pasta is actually made from fresh zucchini which is sliced so thin it looks and tastes like traditional Italian pasta! 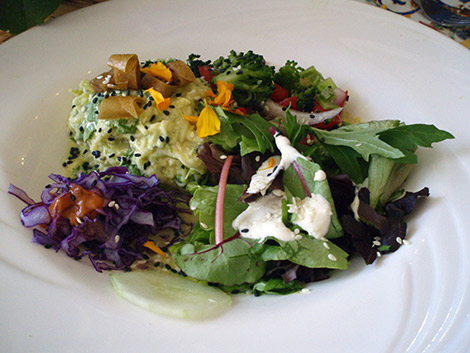 One thing you will notice on their menu is that some of the items listed are labeled as “(warm)” which may seem a little strange for Raw food, but what they actually do is have a very small amount of fresh raw jalapeÃ±o to give the feeling of a warm temperature to the dish without really adding much spice. It’s a pretty cool trick.

This place has not seen the last of us. We will go back every time we are back in Santa Monica, it was truly unbelievable.