Since I couldn’t be on vacation the whole time I was in LA, I at least found a lovely spot to work. Since I’ve been dragging my feet on buying a WiFi card, I had to find an Apple store to hang out near. Luckily, there was one at the Third Street Promenade. I found a nice shady bench and got to work. It was hard focusing on phone calls and emails when I could people watch. Here was my view: 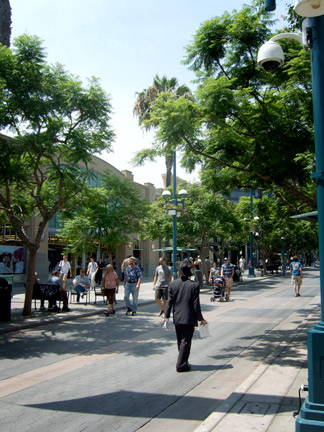 And the generous Apple store for sharing their WiFi with me: 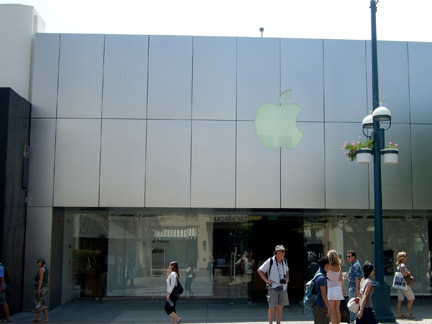 After I finished my work, I walked around a bit. I had read about a fabulous store called Fred Segal so I wanted to check it out. I walked around and finally found it. Wow! This place rocks! They have lots of fun, funky clothes and jewelry. I tried to stay focused – I wanted a gold necklace with a leaf on it. I had been visualizing it for months and no one had one. If anyone could win me over, I knew it would be Fred Segal. I tried on some fun clothes and saw they had my fun Vanitas dress I got last month since Bloomies in Orlando was testing the line (dresses only, but I won’t complain). Fred Segal is like a bunch of stores in one – I was so excited and overwhelmed at the same time – I can’t wait to go back and not be so freaked out. It is a shopping paradise. It’s funny – since I went I’ve been telling everyone about this place. Everyone keeps giving me this look and saying “oh, wow, THEE Fred Segal?” and I was confused. Apparently this is a well known place for celebs to shop. I was told it was expensive, but I tried on quite a few things that were not bad. No, they were not H&M prices, but this was much nicer stuff.

Anyway, I moved from jewelry counter to jewelry counter looking for the gold leaf necklace. And there it was – with about 4 others. I knew right away which one I wanted and I waited for a minute to see if maybe I like the others better. But I didn’t want to second guess what I had been visualizing all this time. So I bought the necklace! I was so excited I had to call Chris right away. I think deep down he was excited that I would finally shut up about the damn gold leaf necklace!

I decided to go sit in the park overlooking the beach and take a break from shopping. Here is a fun self portrait with the Santa Monica Pier behind me: 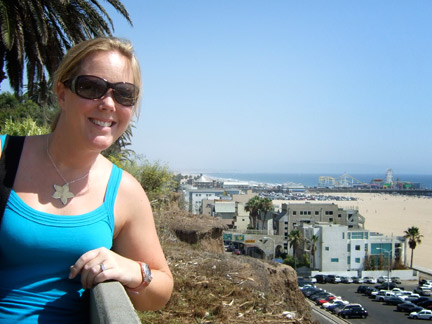 And the view to the north: 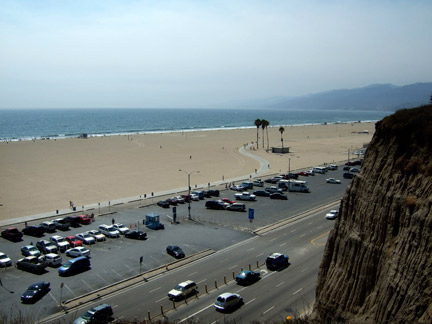 I shopped a little more and then decided to find some yoga stores and a place for a snack. I stopped at Real Food Daily and I ordered a carrot, beet and ginger juice. As I wanted for the juice, I read they had vegan, gluten-free desserts. Since I was still excited about my earlier find at Euphoria, I decided to ask and see what they had. Chocolate Pudding! So I ordered it. When it came, it was in a HUGE bowl. Seriously – this was four servings, not one. I sat at the bar and slowly skimmed the surface of the pudding enjoying every bite. A guy that worked there came by and said “you are not really digging in like most people do!” and laughed. Then I felt the girl next to me staring at the pudding and staring at me – back and forth – just like Duke does when I eat! Finally she asked “is it good?” and I said “yes!” as she stared. Finally I made her day and said “do you want to try some?” and she said “that would be great!” and we ended up talking for about an hour eating the to-die-for chocolate pudding made with silken tofu, coffee and a few other things. Yum! She told me the best yoga stores to shop at and I was on my way. I was looking for a new mat but I didn’t find one that I loved and I ended up buying a woven linen ballet top to wear over a tank when I am not quite in a sleeveless mood.