A little history – I have a cookbook called Raw: The Uncook Book

and ever since I’ve been interested in making meals with raw foods. It isn’t easy to do!

But I knew that Santa Monica had a few raw places and even more vegan places. So I was eager to try a few of them out. My first stop was for lunch at Euphoria loves Rawvolution. I was a little surprised (read: fearful) of the overly friendly and talkative patrons. I later realized that everyone in this town talks to everyone whether they know them or not. I am not used to this! I ordered the Green Dragon Roll – and when I ordered it I asked if the garlic cream sauce had any dairy. Funny – I think they were actually surprised, maybe even offended that I asked! That is opposite of Orlando – you ask, they think you are weird and say “uh, no, uh there is no dairy in that” and it comes covered in butter. Ugh! Then I ordered a glass of the Cleansing Green Juice.

Check out my roll! No bread, no dairy! It was so yummy! 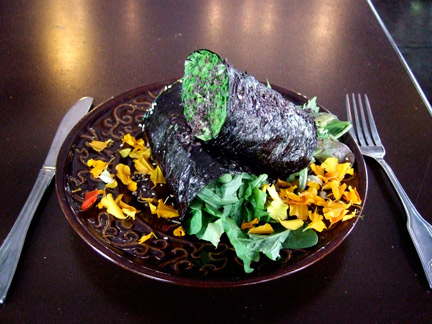 I sat there for about an hour and I talked to a girl next to me about raw. I told her if they had this place in Orlando I would probably eat there every day. And she said “I do eat here every day!”

Well, a good thing just got better. I decided to order some dessert to go. They had a large selection of pies, cakes and cookies – all completely raw. I decided to go with the truffles: 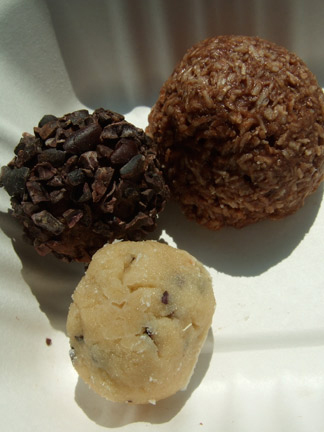 The bottom truffle is a chocolate chip cookie dough, the top left is the dark chocolate truffle and the top right is the chocolate coconut. Holy Heaven! These things are too good to be true! I am a tad obsessed with food, especially chocolate. And since this crazy allergy diet started, I have not had a good dessert. These truffles hit the spot! If you are in Santa Monica and a bit to scared to try the raw meals, at least try the desserts! If you haven’t had a good dessert in months, take it easy. I ate all three within an hour and I actually felt a bit ill because they were so rich. My body was not used to this!