Our plane was delayed on our way out of the Bahamas on Sunday and while we were waiting we went out to watch all of the planes come in. It was unbelievable how busy the little airport was at Treasure Cay, most of which was private charters which seem like a good idea now because our flight was delayed 3 hours and we were close to spending another night if we couldn’t get a flight out.

We were entertained though by all of the groups coming in with fishing poles and supplies, especially one group of guys that were obviously coming in for a long guys only vacation. They had several cases of cokes, a few cases of chips and quite a few cases of beer loaded on their plane with their few bags of luggage. There were three guys unloading their stuff and they filled up a cart with more stuff than any of the other planes we watched. 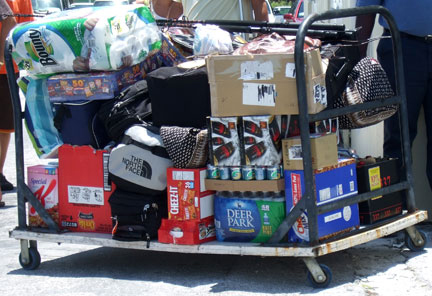 So after going through customs and loading their car with all of their stuff one of the guys headed back to the baggage guys and gave them a case of beer as a thank you for unloading the plane. With the amount of luggage they were dealing with they really were doing a great job, and you should have seen the smile on their faces. It’s probably rare that they even get a tip, and I think this one really made their day.