The More of Less – Book by Joshua Becker 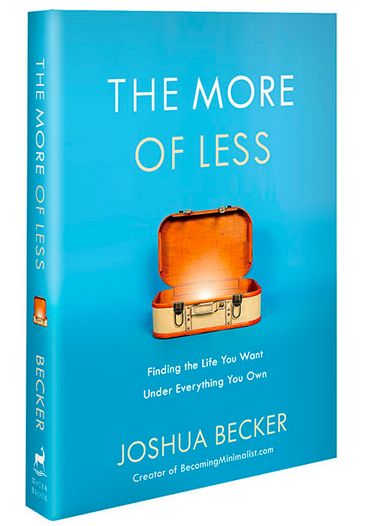 I wouldn’t consider myself a minimalist. But I have owned and moved WAY too much stuff in my life. And more recently, I have downsized – twice. So reading books about minimalism definitely interests me.

When I moved into my dorm room at the University of Florida at 18, I had TOO much stuff. I remember driving down to move in – following my parents who were pulling a trailer of my stuff and things were falling off of it. This was pre-cell phone days and I had to pull over and collect the things that blew off the trailer. And I remember a dolly my dad was maneuvering up some stairs outside of the dorm hall was full of crates of CDs (I LOVE my music!) and somehow my dad lost control of the dolly. Bam – CDs were flying everywhere. What a mess. I guess it is easier now in 2018 to have all of my music on Spotify and iTunes. But I still had a hard time donating all of those music CDs even though I can listen to all of it online now.

I’m not really sure when I got the downsizing or minimalist â€œbugâ€ but I know we were living in Orlando. Something tells me I was probably cleaning out my closet. And by cleaning out my closet, I mean pulling everything out and then painfully putting everything back. I never seemed to get anywhere with this method. And in reading Joshua Becker’s book The More of Less – I know I am not alone. You can’t organize too much stuff. I converted a bedroom in our house in Orlando into a walk-in closet. It was organized. But every drawer was packed full. The fall season would inspire me to go to the mall and buy a light black sweater cardigan. And when I got home to put it away – there was another black sweater cardigan at the bottom of a full drawer of sweaters with the tags still on it. UGH. I had SO much stuff – I didn’t even know what I owned!

The More of Less opens with Joshua telling us that he is going to Spring Clean over Memorial Day weekend. He starts with the garage – pulling EVERYTHING out and then just like my closet – painfully putting everything back. And the sad part is – the whole time his 5 year old son wants to play with his dad on the beautiful Spring day. He keeps telling him he will play with him when he is done. And he realizes that he loses an entire day trying to organize a bunch of junk when he could have spent the day with his family.

I promise I won’t quote the entire book. But here are just a few excerpts from the first chapter:

-Not only are my possessions not bringing happiness into my life; even worse, they are actually distracting me from the things that do!

-Too many people spend money they haven’t earned to buy things they don’t want to impress people they don’t like.

-In America, we consume twice as many material goods as we did fifty years ago. Over the same period, the size of the average American home has nearly tripled, and today that average home contains about three hundred thousand items. And the US Department of Energy reports that, due to clutter, 25 percent of people with two-car garages don’t have room to park cars inside and another 32 percent have room for only one vehicle. And one of out every ten American households rents off-site storage – the fastest growing segment of the commercial real estate industry over the past four decades.

I think trying to organize my 1800 square foot house full of stuff is what really got me started on learning about minimalism. I would say to Chris, â€œLet’s move to a 500 square foot condo where we can figure out what we really need in life.â€ Chris would joke back with me saying, â€œJust close off some bedroom doors and pretend the rest is your 500 square feet.â€ Little did I know that not long after saying I wanted 500 square feet – I would get it. In 2013, we decided that our photography business was exhausting us. We loved it – but we never got to celebrate holidays (holidays were our busiest seasons for work) and we just worked way too much in general. Chris is a computer wizard on so many levels and he said he would look for a job so I could take a step back from photography. He ended up getting an amazing job in Washington, DC! We decided to sell our 1800 square foot house and move into GUESS WHAT – a 550 square foot house! Luckily I had a year of weddings booked in Florida so while Chris worked in DC I stayed back in Florida a lot cleaning out our house. It was amazing to see what all we had and to realize we just didn’t need all of it! I had so many things I saved for special occasions – jewelry, purses, clothing, etc. I realized, if I loved it, it was coming with me and I was actually going to use it. And if not, it was getting donated. It was hard to get rid of so much stuff. It was all useful stuff. And we worked hard to buy it. But the fact was it couldn’t all come with us. It was such a relief to have so much less stuff in DC. On the rare occasion that I couldn’t find something I would say to myself, â€œThis place is only 550 square feet. It can’t be THAT lost.â€ And we did get rid of some items in Florida that we needed to re-buy in DC. In Florida, we had a big kitchen full of wonderful gadgets and electronics. But we worked so much that we rarely cooked anything fancy. Once in DC, I had more time to play in the kitchen again and I started to realize I really did want something I had decided to donate months ago.

Then our downsizing journey got even bigger! We decided to move to Europe! We didn’t want to ship furniture and crates of junk on a ship. It just seemed ridiculous. And there was no sense in bringing over anything electronic – it wasn’t going to work overseas anyway. Chris quickly cleaned out his desk and closet and was ready to go in a weekend. It was impressive! I had a little bit harder of a time. It took me about 8 weeks – but I really cleaned out my stuff. I just kept thinking of the Marie Kondo method. As I went through my clothes, shoes, accessories and jewelry I kept saying â€œDoes this bring me joy?â€ and a lot of times, it didn’t anymore. And on the many things I was emotionally attached to (I wore this to so and so’s wedding, I remember wearing this on a date with Chris walking around the National Mall, etc.) I would say to the item â€œThank you – you were great!â€ and I would toss it into my donate pile. It was so crazy how much stuff we got rid of – AGAIN!

Some of the items I donated were books. And since I really enjoyed the books – or in some cases – hadn’t read them yet but I wanted to – I bought the books again on iBooks. I have learned that buying books on iBooks is now the way to go.

Now that we are here in Europe I am not buying as much stuff as I used to. In FL and in DC I would enjoy shopping and buying stuff. I never had a plan. I just wandered and bought this, that and the next thing – clothing, shoes, makeup, jewelry. Now when I shop I have to stop and think: What do I need? What is my closet missing? I now have a plan. Let’s say my black sweater is getting a little worn out looking. I go shopping for just a black sweater. And then I donate the old one. I do miss buying all kinds of random jewelry and makeup and shoes. But I have realized I just don’t need this stuff! And the experiences I am sharing with James and Chris are much better than any stuff I would be buying.

Check out Joshua Becker’s book The More of Less. And check out Marie Kondo’s books, too.

The More of Less by Joshua Becker

The Life Changing Magic of Tidying Up by Marie Kondo