We have been living in Georgetown in Washington, DC for the last four years. It has been a dream! Seriously! When we lived in Orlando, FL I was always telling Chris, â€œSomeday I want to have 500 square feet so I can get rid of all the excess stuff I don’t need in life.â€ and he would laugh at me and tell me to just put all my stuff in two rooms of our 1800 square foot home. But in July 2013 my dream came true and we moved into a 550 square foot home in Washington, DC. It was perfect – I could get rid of my car and walk everywhere. Or I could take the Metro or the bus. Chris kept his Toyota FJ and it was all we needed for a few trips to the suburbs every now and then.

Now that our time here in Washington, DC is coming to an end I wanted to post about all of the things I love!

Morgan’s Pharmacy. We have a local pharmacy a block from our house. They are dog friendly so James always comes inside and gets a treat! Mo always asks how Chris is doing when I pop in for something.

Montrose Park. We found this park the day we looked at our house. It was one of the main selling points for the house we rented – we knew James would love it! And he does! When we walk up to Montrose James knows he is going to perfect his fetch game and play with other dogs. Montrose gets even better as you head north – there are paths that lead down to Rock Creek and other paths that lead up to the Italian Embassy and Hillary Clinton’s house. I love walking up the hill to Hillary’s house and seeing if the secret service guys. Once the presidential campaign really got going I decided not to walk up there anymore – I didn’t want to be in the way and I had a feeling security was increased!

Sephora. I can walk to Sephora in 5 minutes! That is simply HEAVEN for me. There is a man that works in the Georgetown Sephora named Todd and he is the best! He knows me and he knows James (James loves shopping in Sephora, too) and he is always asking how I am doing or how Chris is doing.

TJ Maxx. I didn’t really care for TJ Maxx in Orlando. It was too overwhelming and I had to dig to find the best stuff. But the TJ Maxx in Georgetown is awesome! I am always finding little gems in there! They have a great selection of towels, bedding, shoes, dog toys, dog beds, accessories and beauty products. I actually found dog breath wipes that I use for James! James is also welcome in TJ Maxx. We often go shopping with our friend Zouhair and his white standard Poodle Faris and the two poodles get SO much attention!

The Georgetown Waterfront. I like to walk in the mornings and this route along the Potomac River is my favorite morning route. I enjoy seeing the other walkers, joggers and bikers and watching the sun rise. The sunsets over the Key Bridge are amazing, too! There is a little wooden bench (all of the other benches are metal) and is has a little compartment underneath the seat. It often has a book where you can write quotes, dreams, etc. I also love watching the kids play in the fountain. I actually witnessed a wedding proposal under the fountain one day and it was perfect!

Georgetown University. I love walking through college campuses and Georgetown is just beautiful. We walked over to a football game against Harvard one day and ended up talking to the parents of one of the Harvard players (we had James with us and he is the reason our conversation started of course – the Poodle always gets people talking!). There is just something about Georgetown and DC – you are in a BIG city (Hello, the US capital! It shouldn’t get much bigger than that!) and yet it feels like the smallest town we’ve ever lived in.

Jackie Kennedy’s house. When we first moved into our apartment we wondered why so many tourists took pictures of our house. Maybe it was James in the window. Maybe they liked the odd peeling paint look? We didn’t know. But sitting on the front steps all the time is how we figured it out. A Big Bus Tour drove down P Street. And sometimes you could hear what the recorded tour was saying over the speakers. “If you look to your left past the big flag – that is where Jackie Kennedy lived after the assassination of her husband, President John F. Kennedy.” What?? That isn’t correct. Apparently the tour used to come up 30th Street where you could look left on N Street and just past the HUGE flag was in fact the house where Jackie Kennedy lived. But the incorrect tour information had many, many tourists stopping and taking pictures of our house! Sometimes tourists would approach us as we sat on the steps and they would say “This is so exciting that you live in Jackie’s old house!” and we would tell them where to really find the house. We even thought about putting a little sign out front so the tourists would find the correct house. The real Jackie house was MUCH bigger than our house and much more impressive. A side note – the neighbor on N Street with the big flag out front actually just bought Jackie’s old house. The house was in desperate need of repair and updates. So many of our neighbors were angry with this neighbor for fixing up the house because he was messing with history. But he was actually fixing up the house and the landscaping and the house looks SO much better now. And one night just after dark we walked by and a beautiful painting of Jackie is above the fireplace. It made me tear up. What a nice way to honor Jackie. It is sad that Jackie didn’t stay in that house for long. Apparently it was a tourist attraction with hot dog vendors out front. Jackie would leave the house with her children and strangers would run up and grab at them. So they moved to New York City in a secured building.

We are ready to move on to our next big adventure. I will miss DC. I will miss Georgetown. Just like I missed Orlando when we left Florida.

Our cute little home for the past four years: 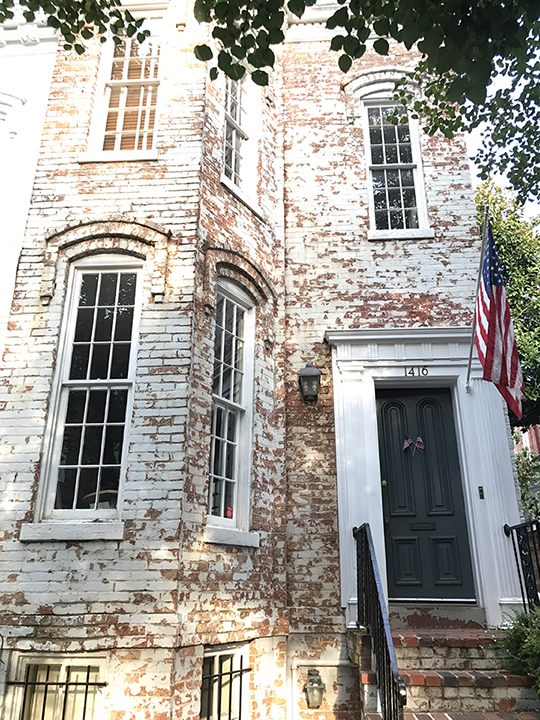