I love Jeff Koons – his works is always so whimsical and the flower dog “Puppy” he made always makes me smile when I see photos of it. I also love his balloon animal series using stainless steel with mirror finish surfaces. 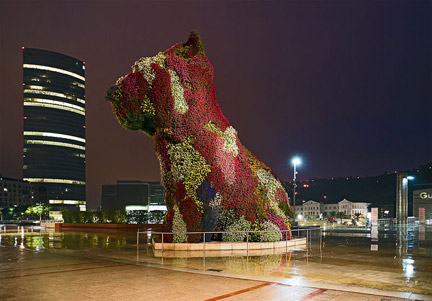 Some fun Wikipedia info on Puppy:

Koons was commissioned in 1992 to create a piece for an art exhibition in Bad Arolsen, Germany. The result was Puppy, a forty-three feet tall topiary sculpture of a West Highland White Terrier puppy, executed in a variety of flowers on a steel substructure. In 1995, the sculpture was dismantled and re-erected at the Museum of Contemporary Art on Sydney Harbour on a new, more permanent, stainless steel armature with an internal irrigation system.

The piece was purchased in 1997 by the Solomon R. Guggenheim Foundation and installed on the terrace outside the Guggenheim Museum Bilbao. Before the dedication at the museum, an Euskadi Ta Askatasuna (ETA) trio disguised as gardeners attempted to plant explosive-filled flowerpots near the sculpture, but was foiled by Basque police officer Jose MarÃ­a Aguirre, who then was shot dead by ETA members. Currently the square in which the statue is placed bears the name of Aguirre. In the summer of 2000, the statue travelled to New York City for a temporary exhibition at Rockefeller Center.

Media mogul Peter Brant and his wife, model Stephanie Seymour, have an exact Jeff Koons duplicate of the Bilbao statue on the grounds of their Connecticut estate.