I first had a Tarot Card reading in Spring 2005 at the Junior League Gala. They had a Mardi Gras theme and Chris and I decided to try it. It was freaky how “right-on” the reader was for both of us. One of my favorite things the reader said was “You are very good at creating things from nothing.” I didn’t realize what it meant at first, but then Chris pointed out it was photography. There were so many things she said that night that freaked me out a little. Then Chris – she said he was at a fork and he had a big decision to make. We had no idea what that could be and it was maybe a week later he quit his job for a new one. I can’t remember everything that night but I know I wrote it in my journal. I couldn’t believe we hadn’t done this before – it was fun!

I decided to buy a set of cards and learn about them, but as life went by I didn’t get around to learning too much (the hardest part is memorizing the card meanings).

Tonight Chris was cleaning out his office and while I was standing in the doorway talking to him I glanced up at the bookshelf. There, the Tarot card book stood out so I decided to learn more about the card setup and the meaning of each place. I figured once I knew the layout and what each place meant, I could just look up the actual card meanings.

I started with my own reading – not sure if this is meant to be done on yourself, but it was again “right-on”! My present card was “justice” which is a card about balance and regaining balance in my life at any cost. I have been saying for weeks I need to get back to having a schedule and I’ve felt unorganized. I won’t go any other details of my meanings, but Chris agreed they were all very-much-me.

Next I did Chris – and his was “right-on” too! His present card was the “three of wands” which is about the movement of ideas from the initial concept to the place where action is starting to happen, including cooperation from others. He has been working on a web project that fits this exactly!

I’ve decided that this is really fun! I am going to start learning the cards and their meanings. So if you happen to be at our place – ask me for a reading!

Here is the book I bought: 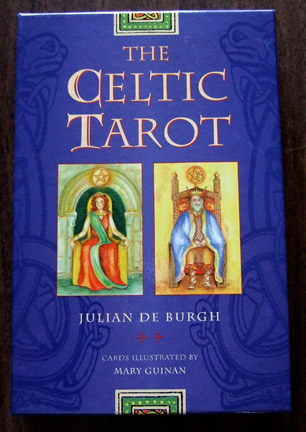 And here is my justice card: 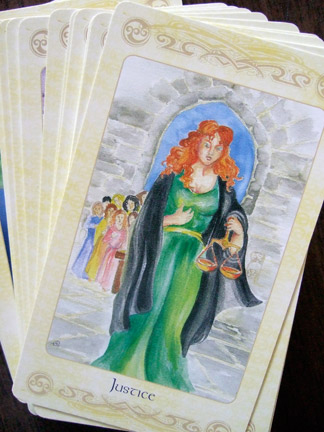