We started watching this show on the Food Network called Ace of Cakes. It is a reality show based on the cake shop in Baltimore called Charm City Cakes. The show is really good and the cakes they make are amazing! I wish they had this store in Orlando.

We had trouble finding someone to make our wedding cake 5 years ago. I found a photo in a magazine of a six tier snowflake cake and another photo of a cake made of presents. This is what I wanted. I went to a shop in town and they would only make our wedding cake as three tiers. I told them I really had my heart set on a six tier cake – I wanted it to be the main focus of the reception. But they refused to do it saying “it would be too expensive” never asking me if I had a budget in mind. Then I told them about the presents cake and showed them the photo. They said they could make them – but they would have a cardboard base inside the fondant – and people would know to cut the present before just biting into it. Huh? I thought that was a terrible idea – I wanted something you could pick up and bite into, like a large petit four.

Here are my two cakes (which we did find an amazing baker to make them in the end!): 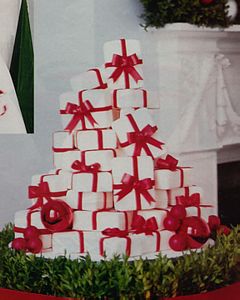 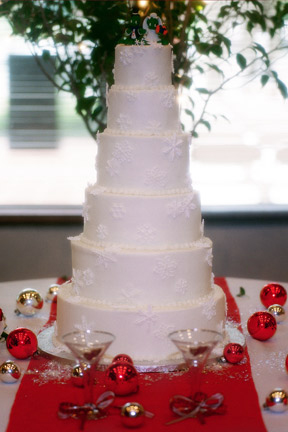 (I wish I had another photo of my cake – it was so awesome! My photographer used a soft filter so you can’t really see the details of the cake)

Anyway, the shop that wouldn’t do my six tier cake because they only do three tier cakes or less – the same shop that wanted to put cardboard in my grooms cake – they had a sign in front of their shop. 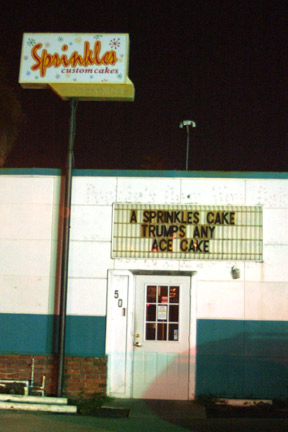 I have to say this really ticks me off every time I pass it. They think they are better than Ace of Cakes, yet their cakes are all the same cake – three tiers with a different design. It is cookie cutter cake to the max. I am shocked they are so arrogant and conceited and they suck! I don’t get it!